The Very Definition Of VIVACIOUS! 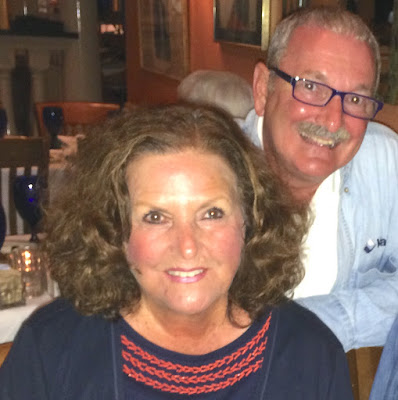 Hard to believe, but she would have been 81 years old today.

When this photo was taken she was already in her 70s. And even as she moved closer to 80 than 75, her appearance, her bearing, her sheer presence continued to belie her age. True, she was seven years older than I,  but she delighted in the fact that most people thought she was the younger sibling.

Small wonder that I always sort of remained in the background, as I am in this photo. But I was perfectly happy to assume that role.
No, she never had a face lift nor any type of cosmetic surgery. So, how did she do it?For one thing, she  never thought of herself as old -- never! She retained an irrepressible youthful spirit. And she never actually identified with "old" people nor particularly sought then out. Instead, she  gravitated toward young people and she always, always had time for children. When it came to children, she was playful and in their zone, and they knew  it. This absolutely delighted her.
To be sure, it's not like she never faced the ravages of aging. To the contrary, Lenora Nancy [Cirucci] Annibale endured two hip replacements and a 20+ year-long bout with various cancers.
But you'd never know it.
She didn't so much hide what was going on as she shoved it off center stage by sheer force of will. After all, who else would dismiss cancer as a mere "bump in the road?"
Her faith played an important role in all this. But beyond everything else, it was her joie de vivre -- her total delight in all the good things in life -- that propelled her onward. It was as if her inner child never left her and kept her upbeat, confident and sunny no matter what. And that proved to be irresistible and made people seek her out. She epitomized vivacity.
Of course, this is not to suggest she was anyone's pollyanna. If you mistook her cheerful optimism for   naiveté, you'd be subjected to a quick reality check. She was incredibly shrewd and a remarkably good judge of character. Her instincts were sharp and they were combined with  an inmate sense of fairness. If she cared about you and she though you were wrong, she didn't hesitate to tell you. Likewise, if she felt you were wronged, she'd be the first one to come to your defense.
To this you could add a fierce loyalty and an abundant love of family -- something that extended to cherished friends as well. And, as noted, her love of children was renowned
Now perhaps you can understand why she is so dearly missed and remembered by all who knew her. But lamenting her absence would be totally unacceptable to her.
So, knowing how fortunate we were, let's close by simply embracing what she shared with all of us and hoping to be inspired by it day after day.
Posted by Dan Cirucci at 9:43 AM