Life As A Political Junkie, Part One: The Origins

I don't know where my interest in politics first developed. I'm not entirely sure exactly where it came from. Maybe it was in my genes. Maybe it was learned. Maybe it was a combination of both.

I'd certainly have to say my father probably had something to do with it. He was a foot soldier for the Democrat Party machine that controlled my hometown of Camden, New Jersey. He was a tireless and absolutely loyal vote gatherer who took a keen interest in all things political. So, taking an interest in politics was a way for me to both bond with my dad and emulate him. Yes, he id take me to a Phillies baseball game at the old Connie Mack Stadium in North Philly once or twice. But I always found my time spent with him at the polls or at campaign events to be far more interesting and impactful. So, politics became our baseball. 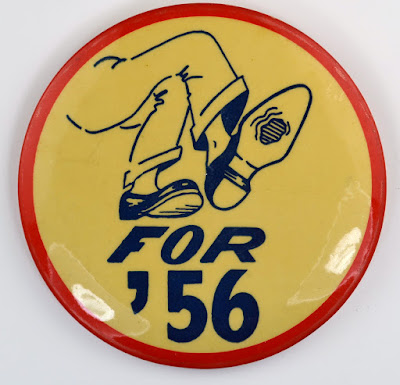 Still, my earliest recollection of anything political involves my mother. It goes back to October 21, 1952 when President Truman came to Camden to campaign for the Democrat presidential nominee, Adlai Stevenson and my mom took me to see the president. We went to the old JC Penney store at Broadway and Federal in Camden and watched the president from an open window on one of the store's upper floors. What a thrill it was to see President Truman as he road by in an open car, standing and waving his hat as the crowd cheered. He even looked upwards toward us, as I recall. Truman addressed a crowd estimated at 12,000 in Roosevelt Plaza that day. I was only six years old. But I remember the big photo of Stevenson that adorned our front door at 550 Royden Street just off Broadway in Camden and we even had small bars of soap in our house that said "Adlai."

In 1956 I remember my teacher at Broadway School in Camden (Miss Smith) sporting a big "I Like Ike" button on her coat. The button featured a photo of her with the president. For my part, I wore a small botton that depicted the sole of an old shoe with a hole in it. The button was inspired by a photo of Stevenson, seated, with his legs crossed that showed the sole of one of his worn shoes had the beginnings of a hole in it. This came to symbolize hard work and a man who presented himself as the champion of working people. It pointed out the contrast between the working man's candidate (Stevenson) and the monied interests of the GOP.  On election night I went with my dad to the old Venetian restaurant in Camden where the Democrats took returns. They had a small black and white TV set up and we learned that Stevenson had lost once again. As that was pretty much expected, my dad and the others gathered there (where food and drink abounded into the night) were more interested in the local results.

Politics was always a big topic of discussion at our house -- often around the kitchen or dining room table. My dad was up early in the morning listening to the news on the radio every day, no matter what. Those who visited had to be up on the news, knowledgeable and ready to participate in spirited discussions. The arguments could be fierce at times and the back and forth was intense. But all of this went hand-in-hand with good-natured digs, cutting asides, jokes, recollections and food and drink.

Camden was a city of vivid, colorful characters and many of them were either engaged politically or had some connection to the political machine. Nearly all of the people that my parents knew had nicknames. My dad (who was known as "Tightsie") was very close to City Commissioner Frank A. "Chick" Abbott. Chick Abbott (anglicized from Abate) had a large following in the Italian-American community. We used to travel to Absecon near the Jersey shore to go fishing with Chick who drove a big Chrysler Imperial. I was best friends with Chick's grandson, Louis. Other characters that I remember had names like Washtubs, Mikey One Punch, Johnny Long, Yeppy, Squirrel, Paulie and Peter Rabbit. They were all friends of my parents. You can amuse yourself considering the real meanings of the names or what their actual connections were. I never gave any of it a second thought as, growing up, this was the norm. BTW: My dad's nickname had nothing to do with being a tightwad -- far from it. It came from the "tights" or knickers he wore as a kid. 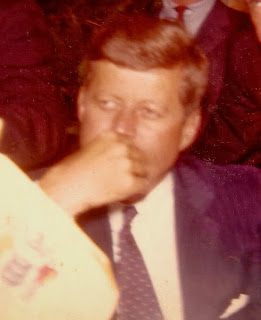 By 1960 I had the rare privilege of actually meeting John F. Kennedy when he came to Camden to campaign at a big event at Camden Convention Hall across from Cooper Hospital. The cavernous hall served as the old Camden armory and it also played host to basketball games, wrestling matches and gala social events. My meeting with Kennedy has been amply described here and any further recollection is not necessary. Suffice it to say it was one of the most memorable nights of my life. I was a huge JFK fan who campaigned for him relentlessly and was devastated by his assassination. I do remember the night that he won by a razor-thin margin. I stayed up very late, glued to the TV hoping to hear the election's final result but it was not until the next morning that my father gave me the good news that JFK has squeezed by. I was thrilled! BTW: The photo that you see here of Kennedy is a photo that I took that night.

In 1964, as a recent high school graduate,  I was at the Democrat National Convention in Atlantic City where I was part of the Young Citizens for Johnson contingent. We had a great time and I actually got to meet the renowned journalist and TV anchorman, Walter Cronkite of CBS News. Cronkite was so respected (and, presumably so credible) that when he signed off every night and said "and that's the way it is" people actually believed that's the way it really was. His newscast dominated the ratings night-after-night. When I met him he was standing very calmly at the back of the huge Atlantic City Convention Hall (the world's largest quonset  hut) quietly observing the proceedings just like any other spectator. He sought no attention and no special treatment and he was very approachable. I also remember that the Republicans had placed a giant billboard high above the famed Atlantic City boardwalk that showed a photo of Johnson's opponent, Barry Goldwater, and simply proclaimed "In your heart you know he's right." Johnson's slogan was "LBJ for the USA" and he coasted to a landslide victory. But, something about that billboard . . .

Anyway, I've always seen politics as a vast human drama. That's much of the attraction of it for me. I love the bigger-than-life characters that it attracts; the passion and sheer energy that people invest in it; the excitement of campaign rallies; the thrill of election night; the many twists and turns along the way and the constantly unfolding real-life drama that politics embodies. I also love the fact that there are no "tie games" in politics. Invariably, one way or another, somebody wins and somebody loses. To the victor belong the spoils. Politics is genuinely consequential. It makes a real difference in people's everyday lives. It's not a game. Also, there are no consolation prizes, no second or third place medals in politics. There are astronomical highs and staggering lows and you have to learn to ride the rollercoaster and survive.

Politics teaches you a lot about life -- about playing to win, about loyalty, about friends and enemies, about the power of ideas, about power itself and also about accepting defeat and learning to come back and perhaps eventually triumph after all. It's a strong tonic that's not for everyone.

How and why did I change my political stripes?

Why am I still a political junkie?

I'll save all those questions (and answers) for a later post.

For now, I'll simply observe that Albert Einstein was right when he said that "politics is more difficult than physics." Yes, politics is not, and never will be, a science. But politics is a helluva lot more fun!