How DUMB Are Liberal Elites? Watch This! 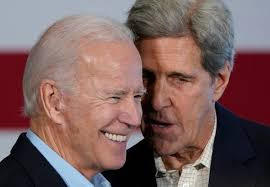 Here's a perfect example of how damned DUMB these liberal elites are. Watch as the pompous former Secretary of State (and failed presidential candidate) John Kerry insists "There will be no separate peace" between Israel and the Arab states without the Palestinians. Kerry tells a liberal think tank audence "No, No, No and NO!" it simply WILL NOT happen. But President Trump did it. He just finished brokering an historic peace deal between Israel and three Arab countries (UAR, Sudan and Bahrain) without the Palentinians. For years, we listened to these inside-the-beltway clowns like Kerry and no progress was made toward peace in the middle east. For years, Washington's entrenched swamp-dwellers keep us embroiled in conflict while they carried out miguided policies -- policies that failed. Then, Trump arrives and he accomplishes more in three years than they did in 30. Why? Because he's not one of them; he doesn't dance to their music and he doesn't play by their rules. You'd think liberal voters (including our Jewish friends) would wake up to this. You'd think . . .
Posted by Dan Cirucci at 5:54 PM