And Yet Another Conservative Titan Is Gone! 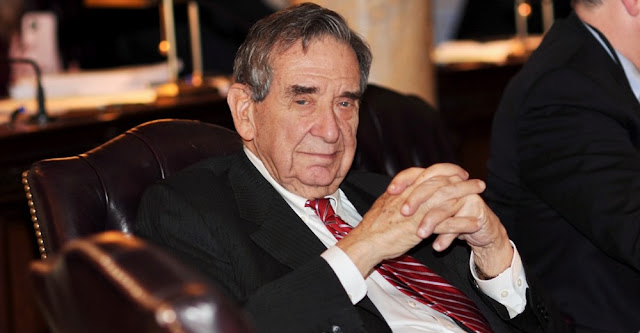 It is with deepest sadness and grief that we share the heartbreaking news that long-serving State Senator Gerry Cardinale (R-39), passed away this morning at Pascack Valley Hospital after a brief illness (not Covid-related). He was 86 years old.

Senator Cardinale faithfully served the 39th district for 42 years. He is the second longest serving Senator in New Jersey history.

He will be remembered for his wit, political acumen, devotion to family and friends, and a deep and abiding love for his state and country. He celebrated his Italian heritage in many ways with his love of Italian food and the occasional grappa.

“Gerry was one of the best politicians I’ve ever seen. There was never a hand he did not want to shake, a door he did not want to knock on, or a train station where he did not want to greet commuters with a smile. He was my mentor and close friend. It will be a long time before we see another public servant like Gerry Cardinale who had guts, commitment and passion for his constituents. He worked hard every day to earn the trust of the residents of the 39th district and maintain his connection to the people of New Jersey.”

Born in New York City in 1934, Gerald Cardinale received a B.S. Degree in Chemistry from St. John’s University and earned a DDS from New York University College of Dentistry in 1959. Aside from his long political career, Senator Cardinale was a Dentist by profession. He served as Mayor of Demarest, NJ from 1975 – 1979, before his career in the NJ State Senate, he spent one term in the NJ Assembly from 1980 – 1981.

He leaves behind his devoted wife Carole Cardinale of 62 years and 5 children. A lifetime practicing Catholic, Senator Cardinale was a member of the parish of Saint Joseph, Demarest New Jersey.