The Lessons Of Moose - Inimitable To The End! 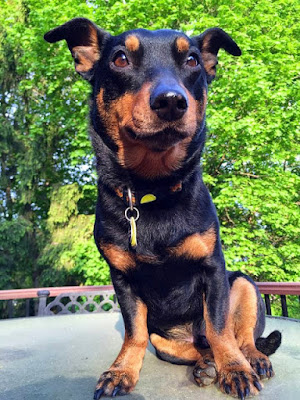 Having never owned a dog, it's hard for me to know exactly what the loss of a treasured pet must feel like.
I say this because our beloved granddog, Moose, has passed away just shy of 12 years-old.
Moose was an invaluable and devoted companion to Adam Cirucci. He came along at an important time in Adam's life and became Adam's best friend -- a pet who saw Adam through new chapters in his life during a very productive dozen years.
Irrepressible and high-spirited, Moose exuded personality and refused to become laconic or indifferent even as he grew older and assumed the role of the family dog. He lived his energetic life on his own terms and we all loved him for it.
If Moose was in the room he made sure you knew he was around. He rarely sat still or remained quiet and he defied all efforts to rein him in. Even as he aged, he refused to live a "settled" life.
He must have known that the end was near as he chose to leave us suddenly of heart failure. To the end, he would not linger: he would not struggle; he would not be a burden The long, slow fade was not for him.
This is the lesson he leaves us: be who you are: stay active: keep moving: raise hell if you must and retain, always, that untamed part of yourself that affirms life and brings joy to others.
Au revoir, Moose. You did it your way!
Posted by Dan Cirucci at 10:01 AM