The following is from our friends at Save Jersey, reprinted with permission:

The winds are shifting in New York as Governor Andrew Cuomo’s handling of the pandemic – and an apparent cover-up – are destroying the Democrat’s carefully-crafted image as a coronavirus leadership success story. On Friday, a group of Democrat New York state senators called for Cuomo’s emergency powers to be rolled back. 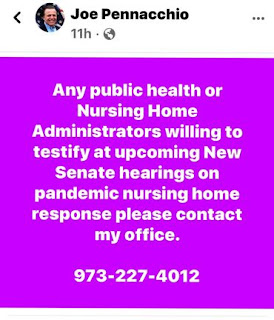 “We now know New York was playing games with the numbers to prevent the loss of life from becoming a political issue,” said state Senator Joe Pennacchio (R-26) on Friday. “In light of the New Jersey parroting New York’s policies, there has to be concern that the true extent of the crisis in our veterans’ homes and nursing homes could have also been downplayed to protect the Governor. The Administration has repeatedly resisted calls for transparency, and refused to share ‘the science’ behind their virus policies. The public deserves some clarity, and the families of almost 8,000 seniors and healthcare workers who died from COVID exposure in long-term care facilities want answers.”

According to The New York Post on Thursday,”Gov. Andrew Cuomo’s top aide privately apologized to Democratic lawmakers for withholding the state’s nursing home death toll from COVID-19 — telling them ‘we froze’ out of fear that the true numbers would “be used against us” by federal prosecutors,” an admission which is rocking Empire State politics. The Post added that “the stunning admission of a coverup was made by secretary to the governor Melissa DeRosa during a video conference call with state Democratic leaders.”

“New York’s admission of obstruction screams for an investigation of New Jersey,” Pennacchio said. “All along, New Jersey’s nursing home policies have been ‘follow the leader,’ following in the footsteps of New York.”

“Murphy’s health department issued directives to long-term care facilities that were verbatim to orders Cuomo sent to home there just days before. It’s not a stretch to think New York’s malfeasance may have been duplicated in Trenton,” the Senator said. “This administration continues to hide the truth, refusing to respond to OPRA requests for information and hiding behind the public health emergency for cover. Any federal investigation into New York should also be looking at what happened in New Jersey. We need to understand whether anybody in Cuomo’s administration counseled New Jersey to do the same thing and obscure the real numbers.”

A state grand jury has already been convened to investigate one of New Jersey’s three state-run veterans homes.

Pennacchio is set to chair independent GOP hearings into the Murphy Administration’s handling on the pandemic; the first hearing date is planned for March.