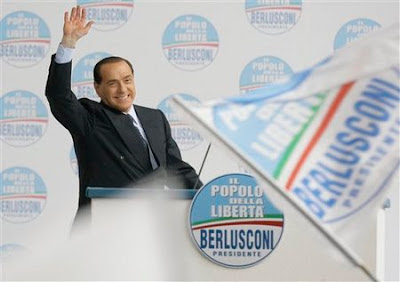 You read it here first.
Back on December 12 (more than FOUR MONTHS ago) I wrote: "It seems Italians are beginning to realize that maybe it wasn't such a good idea to chuck Prime Minister Silvio Berlusconi and his right-of-center government last year."
Now, Bella Italia has joined France and Germany in making a decisive turn to the right. (Can England be far behind?) Here's the latest from the Associated Press:
Media billionaire Silvio Berlusconi won a decisive victory Monday in Italy's parliamentary election, setting the colorful conservative and staunch U.S. ally on course to his third stint as premier.
The victory in voting Sunday and Monday by parties supporting the 71-year-old Berlusconi avenged his loss two years ago to a center-left coalition.
"I'm moved. I feel a great responsibility," he said in a phone call to RAI public television while monitoring election results at his villa outside Milan. Italian news agencies said he had a private dinner with key aides.
Berlusconi capitalized on discontent over Italy's stagnating economy and the unpopularity of Romano Prodi's government.
"Berlusconi won because he has a strong coalition and because people feel that on the other side, the government is going to take them nowhere."
This was Berlusconi's fifth consecutive national election campaign since 1994, when he stepped into politics from his media empire, currently estimated to be worth $9.4 billion
Berlusconi has also affirmed himself as one of Israel's closest friends in Europe.
On Monday, he said he would make his first foreign trip as the new premier by visiting Israel to mark the Jewish state's 60th anniversary. He said it would be a show of support for "the only real democracy in the Middle East."
Berlusconi's party and its allies won strong victories in both houses of parliament despite a strong final sprint by his main rival, Walter Veltroni, who ran a campaign that could have come out of Barack Obama's playbook, with calls to "Vote for change" and supporters armed with "We can!" banners.
In the 315-member Senate, Berlusconi was projected to control 167 seats to Veltroni's 137. In the lower house, his conservative bloc led with 46 percent of the votes to 39 percent.
Bravo, Bravo Berlusconi. Molto bene. Bona fortuna!
Posted by Dan Cirucci at 9:44 PM