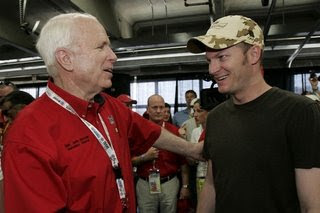 Yeah, Dale Earnhardt, Jr. is NASCAR Royalty.
And yeah, Dale Junior's a McCain guy, too.
Dale Earnhardt Jr. has spent nearly a decade on the NASCAR circuit, where he was Busch Series champion in 1998 and 1999, before advancing to the Winston Series in 2000. He's had over 15 wins and finished in the Top 10 in 90 other races. In 2004, he won stock car racing's most famous contest, the Daytona 500.
Dale Earnhardt Jr. is a major talent. Even people who know nothing about NASCAR beyond the movie Days of Thunder have heard the name Dale Earnhardt, especially since Junior's namesake is a legend in the sport. But the younger Earnhardt is more of a rock 'n' roller than his father, and thanks to appearances in the Sheryl Crow video "Steve McQueen" and the MTV show Cribs, he's recognizable to the MTV generation.
Yep, both Dale Jr. and John McCain come from a long line of winners!
Posted by Dan Cirucci at 2:38 PM