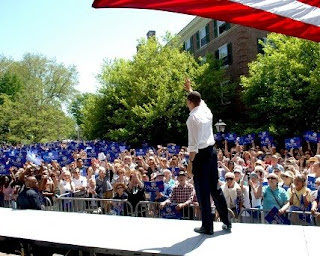 Obama's stuttering, stumbling, rambling today in a series of "ahhhhs.....uuuuhhhs....ya knows.....sooo..." was an extraordinary event - a news conference that looked and felt like a campaign meltdown.
Obama's bumbling of the whole Wright affair and his shifts and turns on this and other matters demonstrate his poor judgment, stubborness and immaturity.
Wright's words and actions have never changed. Not yesterday. Not last year. Not five years ago. Wright has always believed these things; he's always believed in "liberation theology."
So, why has Obama changed his mind about Wright now? Why does he choose to step away now?
Because this is threatening Obama's suddenly shaky campaign, that's why - because Obama finally - finally - realized that Wright is not a political asset.
Though, incredibly, Obama said today he has still not severed ties to Wright's church and Obama never flat out said today" "I was wrong. I was wrong about Rev. Wright. I'm sorry."
This could be it for Obama.
Now, it just may be time to wave "Goodbye!"
Posted by Dan Cirucci at 2:22 PM