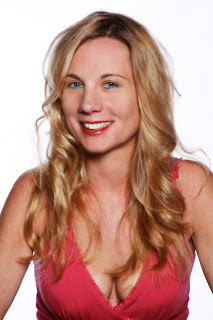 Last night we attended the world premiere of the new political documentary "Electile Dysfunction" along with a capacity crowd at the Philadelphia Film Festival.
This new film by Mary Patel (pictured) and Joe Barber is really a crash course in the modern-day business of politics and it uses the 2006 Pennsylvania Senate campaign between Santorum and Casey as its frame. The production values are first rate and the film moves at a lively pace as it travels to Washington, New York, Philadelphia, Pittsburgh, rural Pennsylvania, Hollywood and many other places. One of the fun aspects of the feature is a series of TV exaggerated TV spots for fictional candidates. They're fresh, funny and just-this-side of believable. In addition to Casey and Santorum some of the notables featured in the film are legendary Philly PR guy Elliott Curson, political consultants Neil Oxman and Joe Trippe, actor Ed Asner, presidential grandson and son-in-law David Eisenhower, former Philadelphia Inquirer editor Gene Roberts, White House correspondent Helen Thomas and Philly TV anchor Larry Mendte.
Patel and Barber have high hopes for getting the film distributed and/or picked up by HBO or some other outlet. Voters can gain ample insight into how propaganda, persuasion and advertising are brought to bear on a campaign and what to watch out for as they decide how to vote. And the film is a must-see for students of politics and communication. Plus, it funny and entertaining.
After the showing we joined others at the post-premiere party upstairs at One just a few blocks from the theatre. At the party were we saw more friends including Penn State Abington criminology prof and author Sean Patrick Griffin, former Philly City Controller Joe Vignola, Philly PR Hall of Famer Nessa Forman and ubiquitous Philly lawyer Scott Sigman.
Posted by Dan Cirucci at 9:35 AM