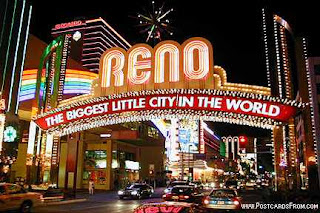 Chris Cendagorta, Executive Director
of the Washoe County Bar Assoc. in Reno, Nevada has just sent us this report about the seismic develop
ments in "The Biggest Little City In The World:"
When even Drudge is warning us to hunker down, you know it's serious. Feels like we're facing the end of time here - the quake "swarm" is getting pretty entertaining. The 4.7 Friday night tossed us out of bed and knocked off pictures, items off shelves and even dropped one of kayaks that hang up at the top of the garage by a few inches. We have many new hairline cracks around doors and windows. Amazingly, the only thing that broke was the lid to an old sugar bowl. We had an ancient bottle of brandy that we got from my husband's parents' old drugstore. It sat up on the top of the cabinets with other old booze bottles. The first thing I saw in the kitchen was that bottle sitting in a partially open drawer next to the fridge - that drawer opened about 3 inches and caught the brandy!
They settled a little yesterday and I actually caught myself missing the rumble that precedes the shaking. I'm not sure what that says about me. Now, they are warning for something bigger. We had about 10 that we could feel this a.m. between 4:30 a.m. and the time I left for work - a 4.2 that didn't feel that big (I'm a regular on the seismo lab's page now) and several aftershocks. You can hear the quake before it hits; it sounds a little like the school bus that rolls down our street twice a day. I found myself this morning (after the 4:30 quake) just kind of waiting patiently and sort of rolling with it. Must be the yoga kicking in.
We haven't done any of the preparation stuff, but we may have to rethink that. Jugs of water at least. I've got some good friends from our Friends of Mt. Rose enviro group who are geologists, seismologists and Desert Research people. They've indicated to watch for a bigger one.
Here's what a day looks like at the seismo lab:
http://quake.wr.usgs.gov/recenteqs/Maps/120-40_eqs.htm
Reporting from the (moving) ground in Reno,
Chris
Posted by Dan Cirucci at 8:03 PM