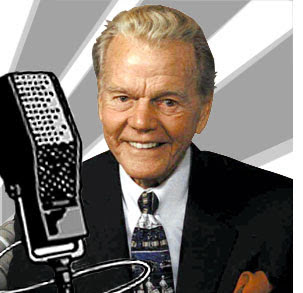 America's favorite broadcaster, Paul Harvey has been recovering from pneumonia and cataract surgery and hasn't been heard on the radio for awhile. But Harvey is due back on April 25.
Paul Harvey is an American treasure.
Paul Harvey began his radio career in 1933 at KVOO-AM, Tulsa Oklahoma while he was still in high school. Later, while attending the University of Tulsa, he continued working at KVOO as an announcer, then as a program director.
Today, Paul Harvey "News and Comment" and "The Rest of the Story" can be heard every Monday through Saturday on ABC Radio and many other outlets. Paul Harvey News is the largest one-man network in the world, consisting of over 1200 radio stations, 400 Armed Forces Network stations that broadcast around the world, and 300 newspapers.
I've been listening to Paul Harvey on the radio as long as I can remember. In fact, I simply can't imagine radio without Paul Harvey. His homespun common-sense, wholesome humor, inimitable style and uncanny ability to find the natural human element in every story make him a one-of-a-kind broadcaster.
To find a radio station near you that broadcasts Paul Harvey click here.
Posted by Dan Cirucci at 1:25 PM

Paul Harvey Sr. seems to be fitting the pattern of 90 something or near 90 celebrities who make token public appearances and pictures, hospitalized for undisclosed ailments with deceptively optomistic press releases from the family regarding health. The culmination of this pattern is usually just a quiet death one day followed by a press release (i.e. Gerald Ford, Lady Bird Johnson).