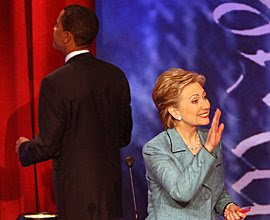 Tom Fitzgerald in the Philadelphia Inquirer:
Sen. Barack Obama was thrown on the defensive about everything from comments by his former pastor to his friendship with a member of the radical Weather Underground, to why he rarely wears an American flag pin in his lapel.
It could not have been the performance Obama wanted to have six days before the state's primary, at a time when he needed to reassure voters who might have been put off by his recent remarks about "bitter" small-town residents in the state who "cling" to religion and guns because of their economic frustration.
At one point Obama said, "I revere the American flag – and I would not be running for president if I did not revere this country." That is not a good thing for a candidate to have to say.
Photo:Michael Bryant / Inquirer
Posted by Dan Cirucci at 10:12 AM