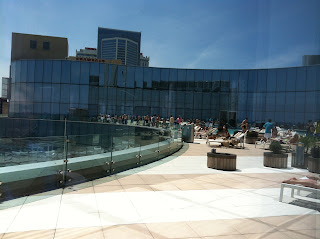 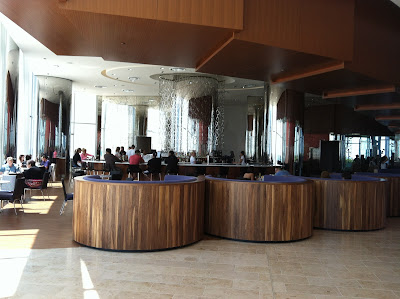 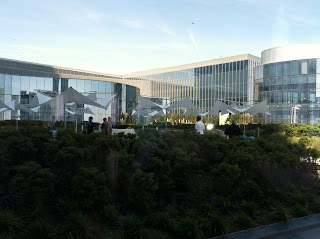 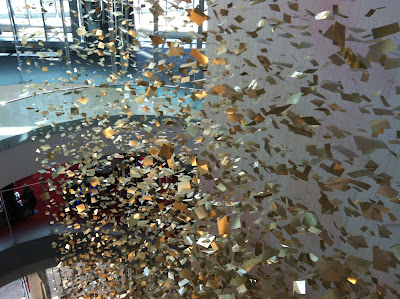 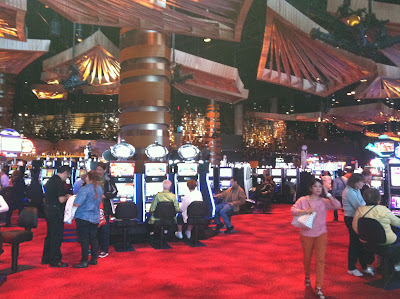 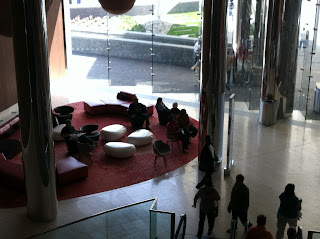 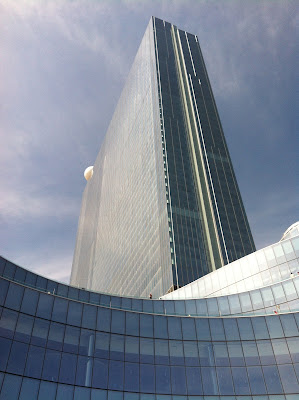 The weather was beautiful today.
So, we journeyed to Atlantic City via a NJ Transit train to have a peek at Revel, the new oceanfront resort-casino.
We found it to be dazzling, sleek and wonderfully seductive.
Revel is the next generation in the genre of resort-casino-hotel and entertainment center.
The curved, inviting mid-century design of Reveal evokes a high point of modern architecture and jet set styling, but with a new twist.
It's big and shiny and strategically positioned. But Revel doesn't shout.
Instead, the wraparound structure speaks for itself. You won't find an obvious sign or identification on Revel. If you don't know what it is, you obviously don't belong there.
Inside, it's all retro-sixties with updated colors and plenty of light and space. Unlike other casino hotels, Revel doesn't turn its back on the ocean; instead, it invites it in.
So you're treated to spectacular views of the white sandy beach and the vast Atlantic beyond.
But you won't be able to access all that Revel has to offer unless you're a hotel guest.
Vast portions of it are off-limits to daytrippers and gawkers.
Yes, you can get a courtesy card and join Revel's frequent user club. The bad news is that you'll receive no freebies when you join: no free slot play, no comps of any kind. The good news is that you'll earn points for every dollar you spend in Revel (not just while gambling but even at the bars and restaurants) except for parking.
Revel is obviously inspired by the new City Center hotel-casinos in Las Vegas that we visited last year.
And they are truly breathtaking.
Is Revel up to par with Vegas?
Doesn't the question answer itself? Only Vegas is Vegas.
But this is a bold -- and welcomed -- breakthrough for Atlantic City.
Revel in it.
Photos copyright 2012 by Dan Cirucci.