Catch 'Catch Me' When It Comes To A City Near You! 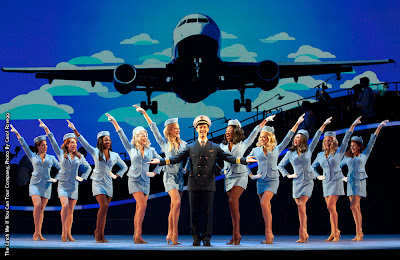 The Broadway musical Catch Me If You Can is playing in Philadelphia for a few more performances (Saturday and Sunday) before it leaves town.
By all means, catch the show before it departs.
Of if you're in another city where it's performing, make sure you catch up with it.
We just saw the show at Philadelphia's Academy of Music and this was our second time. We still love this show!
Here's what we said about it more than a year ago when we saw it on Broadway:


Maybe it was because we loved the movie on which it is based.
Maybe it was that we found ourselves mesmerized by the electrifying Tony Award-winning performance of Norbert Leo Butz.
Maybe it was because we finally got around to discovering one of the brightest, most talented, most appealing new leading men on Broadway -- Aaron Tveit.
Or maybe it was just the way Kerry Butler belts out a song or the mere presence of the great Tom Wopat.
For whatever reason, we loved the new Broadway musical Catch Me If You Can and we urge you to catch it on Broadway (if you can) before it closes on Sunday, September 4. Because, if you don't catch this show you'll have to wait till 2012 or 2013 to see a traveling production when the whole thing goes on national tour.
We had heard so much about "Catch Me" and we suspected that the show might be a lot better than some of the critics said it was.
We were right.
If you saw the 2002 movie (based on a true story) starring Leonardo DiCaprio as Frank Abangale, Jr. you know that Catch Me If You Can is a fascinating tale. So, the musical automatically benefits from a good, strong book -- and that's rare for a musical.
Plus, the adaptation for the stage is written by Terrence McNally and the words and music are by Mark Shaiman and Scott Wittman. This is a Tony-winning dream time that has given us several other blockbuster hits.
But this this show ain't no happy-tooting lark. This is a dark story -- a story of deceit, abandonment, crime and loneliness. Which makes it all the more incredible that the creative team and the fine company of actors and musicians on stage have still managed to send the show soaring with up-to-the-minute humor, retro sixties trendiness and a huge dollop of hope -- all based on fact.
Criticisms? Well, the show is way too loud at times. But most current Broadway shows are over-amplified these days and tunes (even ballads) are frequently oversold. And sometimes the breathlessness can't keep up with the sheer volume and weight of this stranger than fiction story. Plus, I wondered if the show might have been improved without the device of the full orchestra on stage. It seemed to cramp the production values at times.
But no shortcomings warranted the less-than-fair deal that this show got from some critics and the Broadway cognoscenti. Surely it was worthy of more than the four Tony nominations (and one Tony) that it received.
In many ways, this type of entertainment is (or should be) what Broadway is all about.
Catchy and notable songs include: Live In Living Color; Butler's magnificent Fly, Fly Away; Little Boy, Be A Man; the darkly humorous Christmas Is My Favorite Time Of Year; Seven Wonders and Norbert's show-stopping Don't Break The Rules.*
And we need to mention that from Tveit and Butz and Wopat and Butler right down to every chorus member the cast is wonderful. This too: Miraculously, the second act is even stronger than the first.
Catch it. Hurry! Or hope to see it on the road.
*We've already purchased the album.

BTW: At select performances (the one we saw in Philadelphia was included) the real Frank Abangale, Jr. appears after the show to answer questions about his life. He's now 64 years old.


Here's is the tour schedule for Catch Me If You Can:

PHILADELPHIA, PAJanuary 15-20,2013The Academy of Music

LAS VEGAS, NVJune 18-23,2013The Smith Center for the Performing Arts