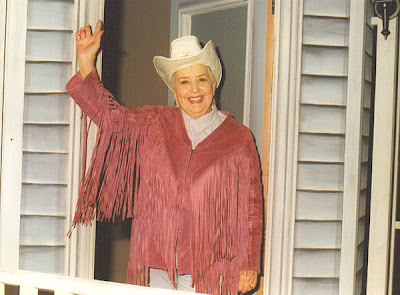 Sally Starr.
The mere mention of her name conjures up images of black-and-white console TVs, Popeye and Bluto,  cowboys and indians and a kindly "aunt Sally" figure who watched out for you between the end of the school day and dinner time.
To Philadelphians she was and always will be "Our Gal Sal."
She understood the intimacy of TV and a part of her must surely have always remained a child.
Sally Starr didn't need child counsellors or psychologists or advisors or consultants to help her do childrens' TV. She just did it. She knew. She understood. She cared. She believed.
Yes, she believed.
She really believed in things like "love, luck and lollipops" -- a phrase she used again and again on her show. And it wasn't an accident that the "love" part came first and the lollipops came last.
There was no doubt that Sally Starr believed in God and in good and evil and in simply letting kids be kids. It was all right there -- just Sally, the cartoons and her audience. She didn't need any gimmicks. She didn't even need to raise her voice, ever.
She simply understood kids and knew hot to talk to them, how to relate to them, how to make them feel good and contended and secure.
Sally Starr enjoyed a long and accomplished life. In fact, she turned 90-years-old just two days ag
For nearly 20 years, beginning in the 1950s, when TV was in its infancy, Sally Starr had daytime shows here on 6 ABC-TV in Philadelphia.
Born Alleen Mae Beller in 1923, she had her name legally changed to Sally Starr in 1941.
Sally Starr had many accomplishments and it's safe to say that she was truly beloved throughout the Philadelphia region and always fondly remembered by the (now grown) children that she cared for and mentored via TV. She was a member of the Philadelphia Broadcast Pioneers Hall of Fame.
She retired and moved to Florida, where in 1987 a fire destroyed her home and her treasured broadcast memorabilia.
Sally Starr then moved back to the Delaware Valley and did a radio show at a Vineland station before moving into a continuing care facility in Berlin, New Jersey.
A cause of death has not been released.
Funeral services will be held privately.
Posted by Dan Cirucci at 5:16 PM