What exactly is the allure of the Mona Lisa?
We're not sure we even know.
We gazed at her for quite some time (amidst huge crowds) at Le Louvre and we're still somewhat mystified. Still, we did get close enough to take the photo shown below.
To begin with, we never were convinced that she was smiling and we remain unconvinced.
Is she looking at us or away?
Does one eye look one way while the other seems not quite in sync?
Is the background really different on either side of her head?
Then there's the slight bit of cleavage -- and those hands, one over the other with the suggestion of long fingers.
This half-length portrait of a by Leonardo da Vinci, has been acclaimed as "the best known, the most visited, the most written about, the most sung about, the most parodied work of art in the world."
Mona Lisa has almost become trite -- sorta like an artistic joke. A cliche.
And yet, she still draws crowds.
She retains her allure.
We think it's because Mona Lisa has an expression that communicates shrewdness.
It's as if she know something that we don't want to necessarily admit, nor reveal. She's been able to look deep into us and she sees something -- maybe something we've been hiding. Is it our insecirity? Something we're worried about? A hurt or disappointment we've tried to surpress? Some secret longing? Whatever -- she gets it.
But if there is a scret, it's safe with her.
It's not that she'll ever tell. She's not talkin.
But she knows.
And that is enough to gurantee her allure.
Oh, one other thing -- she expresses a sort of boredom; a modern-day la du monde. In that respect, she proved to be way ahead of her time. She was existential before there even was such a word. 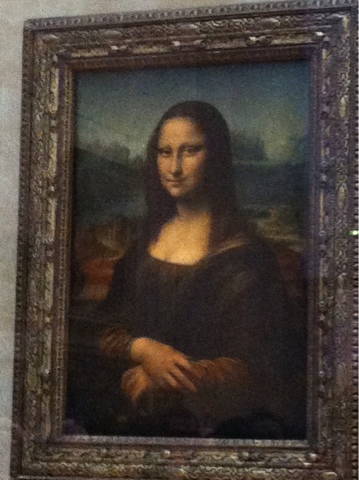