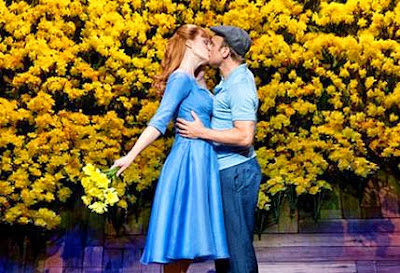 Yes, we do live in a hopelessly touch-feely age
All around us we encounter what appear to be heightened sensitivites.
And in the world of entertainment this has brought us a sea of tender mercies - dramas that trade on hidden regrets, unrealized dreams and long-simmering emotions.
But all of these will take the audience only so far. And now along comes a new Broadway musical that's  comforted with this question: "Are poignancy and pathos enough?"
The New York Times has rightly noted that Big Fish boasts BIG talents, a BIG cast, a BIG orchestra, BIG production numbers and really BIG special effects." The show stars Tony Award winner Norbert Leo Butz and is directed by multiple Tony winner Susan Stroman. And it's based on the 2003 movie with Ewan McGregor and Albert Finney that has since achieved near cult status.
Its theme, revolving around a son's lifelong long desire to bond with (or at least understand) his father would seem to have universal appeal.
But for all the big dreams and big ideas that the show seems to embrace, at its core this is rather small and sometimes painfully ordinary story.
And we regret to report to you that from the very first scene of the show we know that the central character, Edward Bloom (Butz) is not well and will probably die before the story ends.
And there it is: The opening to an evening of pathos and poignancy. Hold onto your hankies, folks.
Now, this is not a depressing show. It is after all a musical. And there are upbeat moments and toe-tapping numbers and some dazzling special effects.
But a musical with even a semi-sad ending starts with an immediate handicap that is has to overcome. Camelot, for example is not a happy story. But id did have that great Lerner and Lowe music as well as Richard Burton, Julie Andrews and Robert Goulet. The Impossible Dream was, alas -- impossible. But it was wrapped in a timeless story with rich, meaningful lessons and it came along at the right time.
In Big Fish, Edward Bloom is no King Arthur, no Don Quixote. He's a traveling salesman from a small town in Alabama. And for all of Butz's incredible talents (and he's one of Broadway's brightest stars right now) he cannot make this character any more than he is.
Norbert Leo Butz is on stage nearly every minute. He doesn't merely perform the role; he lives the role. He's a high-energy star who can capture the audience's heart with little more than a well-timed glance. And since he does that more than once, we're left to wonder: Why can't his son figure this guy out? Why won't he connect the dots that pop up in his father's fantastical stories? Why can't he accept his father as he is and try to build the bond from there? Why does he sometimes seem so antagonistic toward his dad?
As Yul Brynner observed in The King and I (another musical without a happy ending) "tis a puzzlement."
Well, in the end the puzzle is solved, sort of. We come to understand more of the meaning behind Edward Bloom's tall tales. We come to see what his life was all about.
But it's all been so poignant and eye-dabbing that we then feel vaguely pursued by our own mortality.
And we're left to ask: Is this really the kind of musical journey that will have audiences flocking to the theater? Have we become so "kinder and gentler and supportive" that this is the new norm?