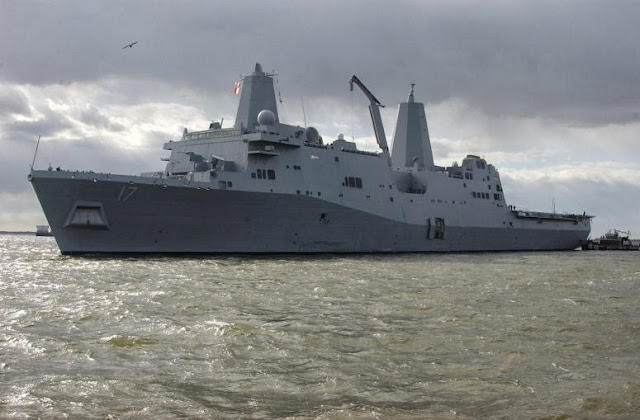 Our hats are off today to the Navy's USS San Antonio.
Just last week the San Antonio held al-Qaida leader Nazih Abdul-Hamed al-Ruqai (known by his alias Abu Anas al-Libi) on the ship after he was captured.
And now the San Antonio has rescued more than 100 men from a raft in rough water in the central Mediterranean.
We know a fine young man who's serving our nation aboard the ship and we're very, very proud of him!

Here's part of the story from CNN:

A U.S. Navy crew rescued more than 100 men from a raft in rough water in the central Mediterranean on Wednesday, the service said.
The news release said 128 men ranged in age from 20 to 30 and were taken aboard the USS San Antonio, an amphibious transport dock ship.
A patrol aircraft from Malta spotted the raft being rocked by winds and waves. The San Antonio, which was 60 nautical miles away, answered a call from the Maltese government.
The Navy crew used two 11-person boats to rescue the men from the raft, which was about 75 nautical miles southwest of Malta, according to Maltese officials.