Catholic Scandal: You Don't Know The Half Of It! 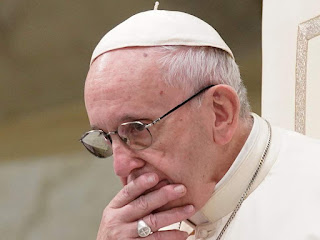 By Jonathan Last of the Weekly Standard, in a superlative analysis of the crisis now gripping the Catholic Church worldwide -- a crisis which threatens to tear the Church apart. And it's all presided over by a Pope who apparently owes his papacy to a cabal that enabled the abusers and opened the door to the ever-widening scandal. This is a must read::


In the weeks after the Viganò letter was published, Francis preached a homily in which he declared, “with people lacking good will, with people who only seek scandal, who seek only division, who seek only destruction” the best response is “silence” and “prayer.” If this sounds like Francis believes the real villains in this mess are Archbishop Viganò and people who want to know what the bishops knew, and when they knew it, well, yes.

In another homily on September 11, Francis went further, saying that not only was Viganò the real villain, but the bishops were the real victims: They were being persecuted by the devil: “In these times, it seems like the Great Accuser has been unchained and is attacking bishops,” Francis preached. And Satan “tries to uncover the sins, so they are visible in order to scandalize the people.” (The Father of Lies—as he is referred to in the Bible—has not traditionally been regarded as the revealer of sins in Catholic thought, but this pope has never been known for having a supple mind.) Francis then offered counsel for his poor, suffering brother bishops: “The Great Accuser, as he himself says to God in the first chapter of the Book of Job, ‘roams the earth looking for someone to accuse.’ A bishop’s strength against the Great Accuser is prayer.”

Other parts of the church hierarchy also seem to view themselves as victims. In late August, Washington Post columnist Elizabeth Bruenig decided to try to get to the bottom of the Viganò story by asking McCarrick himself. She went to the church-owned property where the former cardinal now resides and knocked on the door. Whatever representative of the church—God’s vessel for Truth and Light—lives there declined to answer. Instead, he called the Post to complain about her.

So what is to be done if the vicar of Christ is a fool who sides with bishops who enabled or hid abusers? Or is a wicked man who sides with the actual abusers themselves?

Be sure to click here to read the entire article. It's a real eye-opener. It will shake you to the core!
Posted by Dan Cirucci at 2:44 PM