The Troubled Past Of Newest Kavanaugh Accuser 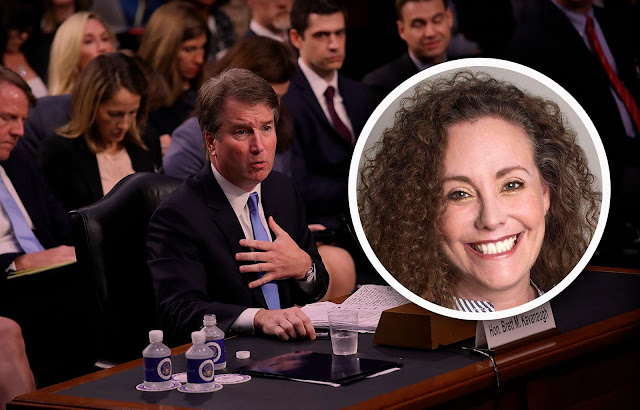 Julie Swetnick, the newest accuser of Judge Kavanaugh seems to have a contentious and troubled background, including some legal skirmishes. From the Wall Street Journal:


In 1993, she [Swetnick] filed a criminal harassment complaint with state prosecutors in Maryland against a podiatrist and his wife, alleging repeated phone calls, according to court records, but the case was withdrawn two months after it was filed.

In 2001, Ms. Swetnick was the defendant in a domestic-violence case filed by Richard Venneccy in Miami-Dade County, Fla. The case was dismissed when both parties failed to appear in court in March of that year, according to court documents reviewed by the Journal.

Roughly a decade ago, Ms. Swetnick was involved in a dispute with her former employer, New York Life Insurance Co., over a sexual-harassment complaint she filed, according to people familiar with the matter. Representing her in the complaint was the firm run by Debra Katz, the lawyer currently representing Dr. Ford. The company ultimately reached a financial settlement with Ms. Swetnick, the people said.
A spokesman for New York Life confirmed that Ms. Swetnick worked there as an agent for less than two years, from 2006 to 2008. She didn’t list her work there on a résumé posted online. . . .

Records show Ms. Swetnick also had recent run-ins with tax authorities. In 2015, Maryland’s comptroller filed a lien against her in Anne Arundel County, a suburb of Baltimore and Washington, for more than $30,000 in unpaid taxes. The state demanded about the same amount in interest and penalties for a total bill of $62,821. The state released the lien in 2016.

In 2017, the Internal Revenue Service filed a lien on Ms. Swetnick’s Washington apartment for $40,303 in unpaid taxes, and released it in March, saying the tax bill had been paid.

And then there's this from Swetnick's ex-boyfriend, via Politico:


“Right after I broke up with her, she was threatening my family, threatening my wife and threatening to do harm to my baby at that time,” her former boyfriend said in a telephone interview with POLITICO. "I know a lot about her.”