Hey, About Those NEW Kavanaugh Allegations . . . 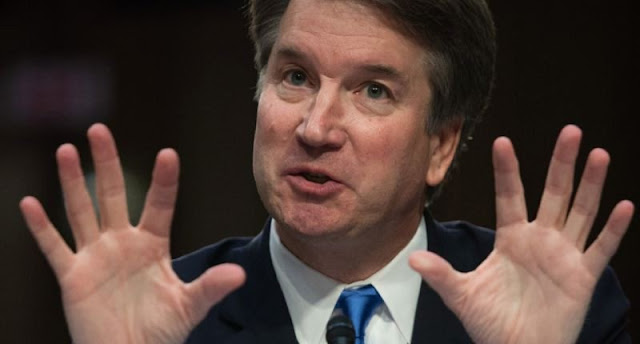 Here's why the latest charges about Brett Kavanaugh involving an alleged incident at Yale may not hold up -- from The New Yorker article, with emphasis added:


[For the accuser] the sudden attention has been unwelcome, and prompted difficult choices. She was at first hesitant to speak publicly, partly because her memories contained gaps because she had been drinking at the time of the alleged incident. In her initial conversations with The New Yorker, she was reluctant to characterize Kavanaugh’s role in the alleged incident with certainty. After six days of carefully assessing her memories and consulting with her attorney, [the accuser] . . .  said that she felt confident enough of her recollections to say that she remembers Kavanaugh had exposed himself at a drunken dormitory party . . .

So, her memories contained gaps; she was not sure; she had been drinking and identifying Kavanaugh took some time and, apparently, some coaxing.

In fact, the accuser admits that during this drinking party, she "was on the floor, foggy and slurring her words" just prior to the incident.

And there's more, the accuser "acknowledged that there are significant gaps in her memories of the evening, and that, if she ever presents her story to the F.B.I. or members of the Senate, she will inevitably be pressed on her motivation for coming forward after so many years, and questioned about her memory, given her drinking at the party."

Well, she's probably right about that. But is she also simply trying to pre-emptively diffuse the Senate and FBI line of questioning and perhaps gain sympathy?

And then she adds this: “It was kind of a joke . . . And now it’s clear to me it wasn’t a joke.” Well, was it a joke or wasn't it a joke? And consider the supposed time of the incident (1983-84) and the atmosphere: what's described as a college drinking party/game.

As far as we can tell there is no direct corroboration of the alleged incident as reported in The New Yorker article. There is only this: "a classmate of  [the acuser's] . . . who declined to be identified because of the partisan battle over Kavanaugh’s nomination, said that another student told him about the incident either on the night of the party or in the next day or two." So, that is someone who was told about it by someone else -- hearsay.

And The New Yorker admits that it "has not confirmed with other eyewitnesses [other than the accuser] that Kavanaugh was present at the party".

But wait, there's more: two male classmates who the accuser (Debbie Ramirez) says were at the party deny any recollection of the event.

And finally, there's this: six other people (inlcuding two who were allegedly at the party) issued a statement that reads in part:


We were the people closest to Brett Kavanaugh during his first year at Yale. He was a roommate to some of us, and we spent a great deal of time with him, including in the dorm where this incident allegedly took place. Some of us were also friends with Debbie Ramirez during and after her time at Yale. We can say with confidence that if the incident Debbie alleges ever occurred, we would have seen or heard about it—and we did not. The behavior she describes would be completely out of character for Brett.

For his part, Brett Kavanaugh has issued this statement:


This alleged event from 35 years ago did not happen. The people who knew me then know that this did not happen, and have said so. This is a smear, plain and simple. I look forward to testifying on Thursday about the truth, and defending my good name--and the reputation for character and integrity I have spent a lifetime building--against these last-minute allegations.

And from the White House, we have this:


This 35-year-old, uncorroborated claim is the latest in a coordinated smear campaign by the Democrats designed to tear down a good man. This claim is denied by all who were said to be present and is wholly inconsistent with what many women and men who knew Judge Kavanaugh at the time in college say. The White House stands firmly behind Judge Kavanaugh.

Finally (and this is really important) there's this late-breaking development, tweeted by Peter Baker of the New York Times:


The Times interviewed dozens to corroborate 2nd allegation against Kavanaugh and could find no one with firsthand knowledge. Ramirez told ex-classmates she couldn't be certain Kavanaugh was the one who exposed himself.

Click here to read all the other stories from the Dan Cirucci blog!  Spend some quality time with us.

I was ready to give the first accuser the benefit of the doubt. But the second accuser has me now convinced this is indeed a smear campaign.

Time to end this BS