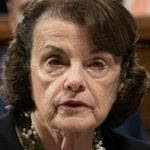 It can be difficult keeping up with the crazy characters in the Kavanaugh Kapades.
So, we've decided to do a thumbnail sketch of some of them for you -- and we've especially focused on the more nefarious characters in the bunch.
In no particular order, here goes:

Jeff (The Fake) Flake: Sort of like the prairie scarecrow as drama queen. Stay away -- far, far away.

Cooky Chris Coons: The wonky weasel of Wilmington. With a JD and a divinity degree, he can presumably fleece you while he's invoking the almighty.

Ditzy Dianne Feinstein: AKA DIEfei, could be the original Wicked Witch of the West.

Crazy Mazie Hirono: The South Pacific version of DIEfei. Does she use the same bootblack to color her hair?

Schmuckie Chuckie Schumer: We cannot improve on the original warning: Don't EVER get between him and a camera crew. Doesn't quite make us long for Harry Reid, but he's workin on it.

Bitchy Richie Blumenthal - The scent of stolen valor follows one of the most reptilian characters in a cavalcade of miscreants.

Shifty Sheldon Whitehouse - From the tiniest of states, he daily defines the term lilliputian.

Snorey Corey Booker - As this self-absorbed gas back drones on and on, the one saving grace is that he's an instant cure for insomnia.
Posted by Dan Cirucci at 5:12 PM