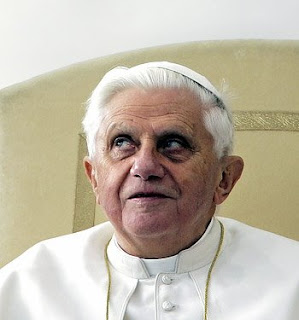 From the Catholic News Service:
Pope Benedict XVI met privately with U.S. Rep. Nancy Pelosi, speaker of the House of Representatives, and told her that all Catholics, especially those who are lawmakers, must work to protect human life at every stage.Pelosi, a Catholic Democrat from California, has been criticized by many Catholics for her support for keeping abortion legal.
"His Holiness took the opportunity to speak of the requirements of the natural moral law and the church's consistent teaching on the dignity of human life from conception to natural death," the Vatican said in a statement about the Feb. 18 meeting.
Natural law and the church's own teaching require "all Catholics, and especially legislators, jurists and those responsible for the common good of society, to work in cooperation with all men and women of good will in creating a just system of laws capable of protecting human life at all stages of its development," the statement said.
Pelosi was making an official visit to Italy to meet members of the U.S. military stationed in the country and to discuss common security concerns with Italian government leaders.Her 15-minute meeting with Pope Benedict took place in a small room in the Vatican audience hall after the pope's weekly general audience.
Pelosi and her staff were not immediately available for comment.As a publicly practicing Catholic and a public opponent of efforts to make abortion illegal, Pelosi has come under sharp criticism by some bishops and other Catholics who believe that a politician who supports legalized abortion should not be allowed to receive Communion.
Queen Nancy (be she secular "royalty" or not) has no business approaching the Communion rail until she amends her beliefs and actions.
Posted by Dan Cirucci at 10:28 AM