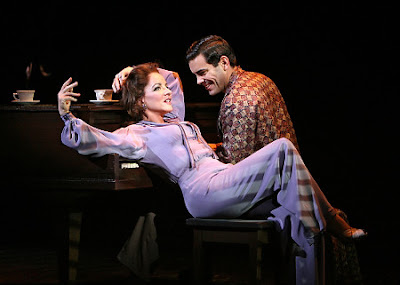 Over the weekend we took a quick trip to Manhattan to catch the Roundabout Theatre Company's wonderful new production of the Rogers and Hart classic Pal Joey.
Set in Chicago in the late 1930s, Pal Joey is the story of Joey Evans, a brash, scheming song and dance man with dreams of owning his own nightclub. Joey abandons his wholesome girlfriend Linda English, to charm a rich, married older woman, Vera Simpson, in the hope that she’ll set him up in business.
The original tale of Joey was written by the great American novelist John O'Hara. For this production the book has been re-written and updated by Richard Greenberg. But the basic story of the cad who is Joey is still here.
If you're thinking that the Broadway show is like the old movie musical of the same name starring Frank Sinatra, think again. The show is darker, more cynical and, in many ways much more current. Pal Joey was way ahead of its time.
In fact, if there hadn't been a musical named Pal Joey there probably never would have been musicals named Chicago or Cabaret. Pal Joey is of the same genre but it arrived on Broadway decades before the others. It set the pace.
Stockard Channing is wonderful as the older woman who "befriends" Joey. Channing channels Lauren Bacall to produce a Vera Simpson who is every bit as smoky, sophisticated and wry as Mrs. Robinson. Martha Plimpton as Gladys is funny, bawdy, rowdy and irresistible. And, Matthew Risch as Joey is a clever charmer who never stops focusing on Number One.
The Rogers and Hart songs are great and it is a joy to see conductor Paul Gemignani leading the orchestra.
Still, if you want to see this fine new production of an American musical classic you'll have to hurry. The Roundabout production at Studio 54 must close on March 1.
Hurry, hurry!
Posted by Dan Cirucci at 6:05 AM