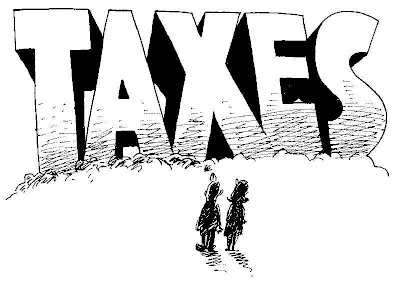 From a New York Post editorial:
While the president has promised that families making less than $250,000 a year won't see their taxes go up "a dime," don't hold your breath.
Now, it's true that the average worker will get $13 a week this year from the stimulus plan, dropping to $8 next year.
But how does that stack up against the Bush tax relief that Americans are likely to lose? Do the math: This year, the Bush tax cuts should save Americans an estimated $205 billion. Divide that by 142 million workers and it averages $27 a week in every pocket.
Looks like average Joes lose. And that's true, even down the income ladder.
Democrats like to claim that most of the Bush tax relief goes only to the wealthy - implying that scrapping it won't hurt others. But maybe they should ask the breadwinner in an average family of four making about $42,000.
The Treasury Department has estimated that the Bush tax cuts would save such a taxpayer just over $2,300 this year - more than $44 a week. If Obama winds up ditching the cuts for him, he'd be worse off, just like the "wealthy."
Even if Obama works money miracles and doesn't hike taxes on anyone but "the rich," there's still cause for huge concern.
Many of the folks who report $250,000 or more in income are hardly fat cats: They're hard-working small-business owners who pay taxes on their revenues via their personal income-tax returns.
In fact, in the top two income-tax brackets - the ones Obama proposes to squeeze most heavily - a full 80 percent of filers report small-business income.
Over the last 10 years, small businesses created 60 percent to 80 percent of the nation's net new jobs. By socking it to their bottom line, the president's new tax move will dry up the nation's most fertile source of employment - just as more and more Americans are looking for work.
So let's get this straight: Obama's big stimulus is a worse deal for workers than the Bush tax cuts he's sacrificing to pay for it.
The tax hikes will slam small-business owners and discourage the entrepreneurship and risk-taking our economy needs.
And by signaling that Americans can expect tax hikes down the road, Obama encourages sensible people to bank their stimulus checks and save for the leaner days ahead - undermining the whole purpose of the massive spending.
Posted by Dan Cirucci at 3:11 PM