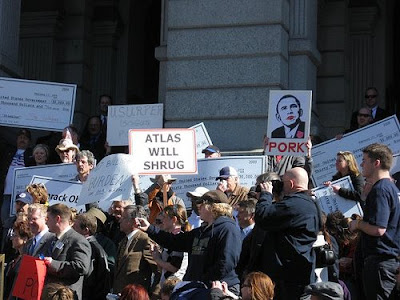 From Instapundit, the Denver Post and The Examiner:
As President Barack Obama’s pen touched paper yesterday to make the federal stimulus bill law, hundreds of people rallied on the west side of the Colorado Capitol to decry the stimulus as irresponsible.
Protesters chanted, “No more pork!” and a few wore costume pig noses. They waved giant $30,000 novelty checks, representing the amount they said the stimulus would cost individual taxpayers. . . .
Many in the crowd professed great skepticism about whether the stimulus would spur the economy.
“I just think there’s no stimulus here,” said Peter Paulos of Denver. “It’s all pork barrel, and I think there are some hidden measures in it. Nobody really read the bill.”
Posted by Dan Cirucci at 6:33 AM

Wonderful isn't it? It's kind of nice being the opposition. Gives you a break from the defense and allows you to get your feet wet with offensive tactics (protesting).

Well, the shoe is definately on the other foot.

Ahhh, I love it. Not only is the shoe on the other foot, but the tables have also turned, we've opened a new chapter, and we're dispensing their own medicine.
And you know what? I love the fact that people are protesting. Let them. It's a free coutnry, with freedom of individual opinions.
But riddle me this: is anyone hearing a lot of trash-talk about the mortgage plan; or the new auto bailouts?
I'd say Obama is hitting his stride. I just wish Geithner wasn't such a tool when explaining things, but that's a minor hiccup.
And I must say, it's nice to see troops moving to places that have some relevancy to the war on terror.
It's shaping up to be a good day.

I'm not up on the mortgage thing. This is how Rush explained it:

You and I both live in a 400,000 dollar house. I live within my means an can actually afford it, you cant. The government will now pay to help you afford it while I get nothing. If this isn't hyperbole than I'm sure you will start to hear lot's of trash-talking. But, you're right, nothing as of now.

And I applaud the President on the the troop expansion.

Geithner is a tool altogether. lol But I'm telling you, if you want to listen to a tool explain things listen to Gibbs, he has to be the worst person in the world for that job. It's like taking a clydesdale to the racetrack and trying to race him. Why the hell would you do that? Agree?? lol

Far be it for me to attempt to correct Rush, but he does get something out of it. His 400k house retains value; he's left with more equity if his neighbor gets bailed out. So even though he doesn't see the $, the government has made sure that he's not losing $. So WIN-win. (the bigger win for the guy who gets bailed out, I admit).
I give "the Gibbon" a little room to maneuver. he looks a bit stuffy and he needs to relax. All these bungled appointments must be giving him ulcers. So I give him a bit of slack, but yes, he does come off as a tool.

That's a good point that I didn't realize. A very good one. But I do agree that what each party receives in compensation is grossly different.

And I agree as well. His job is not easy at the moment. He does need to relax and take control of the situation rather than be controlled by it. I think a noticeable difference has been shown by those reporters in the room. There used to be some sort of etiquette; ask the tough question but do it with an air of respect. That was ignored throughout the Bush years and apparently the lack of respect will continue.

Every screwed up appointee has to punch him in the stomach more than anyone else in the administration including the President. So while as a communications guy I can sympathize, as a GOP member I can find solace in the fact that the ridiculous, ignorant questions continue despite the party in power. Which may by wrong but hey we're all human.