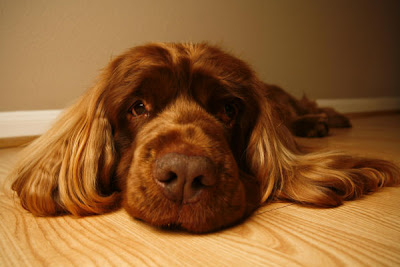 From Claudia Feldman in the Houston Chronicle
Life is beautiful if your name is Stump, and it ain’t bad if you happen to be the dog’s best friend.
Stump, the most famous pooch in America right now, is the 10-year-old Sussex spaniel who took top honors at the Westminster Kennel Club Dog Show last week.
Not quite as well known is the man behind the dog, Scott Sommer, 46. Both live in a spacious, two-story home in northwest Harris County, and neither of them can stop smiling.
Stump, the oldest dog ever to win “best in show” at Westminster, turns into a puddle of melted chocolate when someone pets him or rubs his belly. And that happens nearly constantly.
For Sommer, his life’s dream has just come true — and he didn’t even know he was dreaming it until a week ago.
But first, a little background. Sommer was born into a family of dog lovers in Long Island, N.Y., and he started showing his own dog when he was 5.
“I was hooked,” Sommer says. “I knew that was what I was going to do.”
He graduated from high school at 16 and moved to Houston to begin training and showing dogs for the owner of Kennel at Champions. Though the kennel has changed hands, Sommer is still there.
People bring in their dogs, and he and the staff turn them into champions. Sommer guesses he’s on the road, on the way to or from dog shows, 140 to 175 days each year.
It’s grueling and sometimes lonely work, but Sommer loves it. And he’s good at it.
He and J.R., a bichon frise, won best of show at Westminster in 2001.
He and Stump (and co-owners Cecilia Ruggles and Beth Dowd), won scores of blue ribbons before the personable pooch became critically ill in 2004.
The problem was a bacterial infection so severe that Stump couldn’t even lift his head.
Though Sommer works with lots of dogs, J.R. and Stump are his pets. Stump sleeps with him, sometimes with his golden head, soulful eyes and impossibly long ears on the pillow and his long, plump body between the sheets.
“If I jumped off a bridge,” Sommer says, “Stump and J.R. would follow me.”
When Stump finally recovered, Sommer vowed the dog, then 5, wouldn’t ever have to work again.
And he didn’t. Until Westminster, Stump hadn’t attended another dog show or even had a leash around his neck.
Still, Sommer was taking other dogs to Westminster, and he registered Stump on a lark. He figured he might take Stump, he might not, it depended on how the dog looked and felt a day or two before it was time to get on the plane.
Turned out Stump looked fabulous. He was prancing around like a pup.
“I took him so he could have fun,” Sommer says, “and we did.”
Posted by Dan Cirucci at 6:32 AM