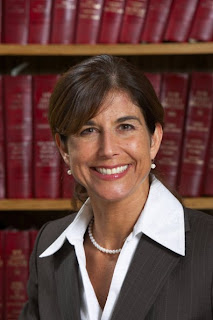 New Jersey's super-savvy State Senator Jennifer Beck (pictured) on the re-appointment of Jeanne Fox to the New Jersey Board of Public Utilities (BPU):
“Governor Jon Corzine’s decision to re-appoint Jeanne Fox to the BPU is an appalling slap in the face of New Jersey’s taxpayers.
“President Fox opened a secret $83 million bank account that was accessible only to her and one other employee. The account collected millions of dollars from New Jersey energy consumers and then distributed the monies to former BPU employees for clean energy programs.
A state audit conducted by the Department of the Treasury found that Jeanne Fox exercised ‘no oversight of how the BPU ratepayer money was spent and that BPU kept poor records of the secret account.’ Another state audit conducted by the non-partisan State Auditor found that the BPU kept no records of: ‘how the BPU evaluated $2.7 million worth of grants given out in 2003 when documentation must be retained for seven years, inadequate controls for giving grants to former BPU employees, insufficient records to justify Payments to vendors including for hours worked and travel expenses and no tax forms issued to 17 vendors in 2004 and 2005 who were paid more than $600, according to Internal Revenue Service requirements.’
“When initially asked about the secret $83 million bank account Jeanne Fox stated that an Assistant Attorney General had signed off on the creation of the account. Later she had to issue a retraction stating that she had ‘misspoke.’ ”
“The secret account was opened in Wachovia bank. A bank in which, coincidentally, one BPU commissioner owned hundreds of thousands of dollars of stock.”
This is exactly the type of abuse that the Governor promised to end during his inaugural address. Yesterday, the Governor of New Jersey stood before the people of New Jersey and stated that ‘I call on each of you, Republicans and Democrats alike; to recognize that today a turning point is at hand. We must turn away from the era of spending and borrowing beyond our means … once and for all.’ Yet here he is re-appointing the poster child for government waste, fraud and abuse. I am convinced based on her record of a secret account, politically motivated policies, patronage hires and poor administration that Jeanne Fox is exactly the wrong person for to be determining New Jersey energy policy and setting rates for New Jersey taxpayers.”
Posted by Dan Cirucci at 7:33 PM