In Line Behind Clooney 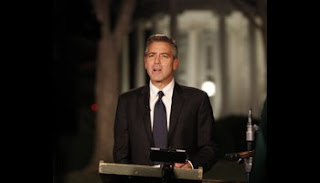 From Christina Bellatoni in the Washington Times:
Academy Award-winning actor and activist George Clooney met privately Monday night with President Obama and Vice President Joseph R. Biden Jr. to urge the new administration's action on the crisis in the Darfur region of the Sudan.
Mr. Clooney told reporters that Mr. Obama said once a foreign policy review is completed, he would appoint a "full-time, high-level envoy" to the region to report directly to the White House. "The administration has assured me that Darfur is one of a small handful of foreign-policy reviews being undertaken at the [most senior] level," Mr. Clooney said.
He said the envoy would be "a huge policy step" since, in many cases, envoys have only been in the region "when the fire starts."
The actor, who made a documentary highlighting the Darfur conflict and has been outspoken on the issue, said it was "nice to hear" that the region is a priority for the Obama White House.
"There was some concern that this could fall off the radar," he said. "There's quite a few other things [the administration is tackling], but they assured me this is high on their agenda."
Well, these are tough times.
And we've all got concerns -- real problems; right here, right now. Those "quite a few other things" that Clooney sloughed off include like failed industries, empty and abandoned homes, insolvent banks, an out-of-control federal deficit, states that are teetering on the brink of bankruptcy, growing inflation fears, lost wages and depleted life savings, record unemployment and a widening sense of hopelessness throughout the land.
Big problems, but I guess they just aren't "global" enough.
So now I suppose we'll just all have to wait in line behind the likes of George Clooney and Sean Penn and Bono and Angelina Jolie and Oprah.
It's a New Day, folks - a New Way. Get used to it.
Posted by Dan Cirucci at 6:11 AM