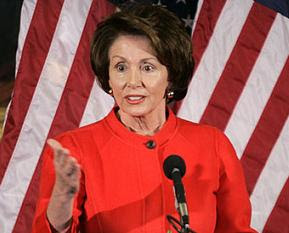 Quenn Nancy (aka Nancy Pelosi) has railed against corporate execs and Wall Street types who live expense-account style. Yet, she herself is currently on a taxpayer-funded junket to Italy. And, get this: The Queen (who rules in the super-secular realm of San Francisco) will spend some time with The Pope.
Here's the story from the Catholic News Agency (CNA):
On Monday at noon in Rome, the Vatican’s Press Office confirmed to CNA that Pope Benedict will be receiving U.S. Speaker of the House Nancy Pelosi in an audience at noon on Wednesday. Pelosi, a self-proclaimed "ardent Catholic" who has sparked significant criticism from fellow Catholics in the U.S. for her pro-abortion views, arrived in Italy on Sunday for an eight-day official visit.
After landing at the USAF base in Aviano, she and the American delegation met with the mayor Florence, Leonardo Domenici at the "Palazzo Vecchio" (The Old Palace.)
On Monday, Pelosi began a series of meetings with Italian political authorities at the Quirinale Palace, where she was received by the President of the Italian State, Giorgio Napolitano. She then moved to the nearby Italian Congress for a meeting with the President of the Government, Gianfranco Fini.
Later in the evening, a reception honoring the U.S. delegation will take place at the Library of Montecitorio Palace where Pelosi will deliver the address: "Strong Allies for a Secure Future." On Tuesday, the Speaker of the House will be received by the President of the Council of Ministers, Silvio Berlusconi, at Villa Madama. In the afternoon Pelosi will hold meetings with the Minister of Defense, Ignazio La Russa and the Minister of International Affairs, Franco Frattini.
Although numerous reports have been published either confirming or denying that Pope Benedict would receive Pelosi in an audience, the Holy See’s Press Office confirmed to CNA on Monday at noon Rome time, that the Holy Father will receive the U.S. representative on Wednesday at midday.The press office made clear that the Pope will meet with Pelosi in his capacity as a head of state since the Speaker of the House is the third in line to lead the U.S., should the president and vice president be unable to do so.
The idea of providing Pelosi with a photo-op has disturbed a significant number of U.S. Catholics and pro-life activists.
Posted by Dan Cirucci at 10:34 PM

Excommunicated! Probably not, but I can wish. If she got her wish of huge government and money for everything from ACORN to Planned Parenthood why can't I get SOME satisfaction.