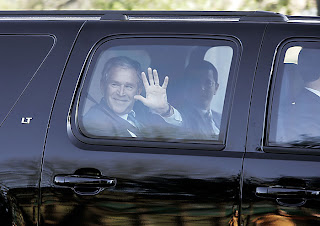 From Lori Stahl at the Dallas News and Tony Gutierrez at Associated Press:
It’s official: Former President George W. Bush is now making his home in Dallas.
After a month at his Crawford ranch, Bush and his wife, Laura, moved Friday into the Preston Hollow home they bought shortly before leaving the White House on Jan. 20.
"President and Mrs. Bush are glad to be back in Dallas, appreciate the warm welcome by their neighbors, and look forward to once again being part of the Dallas community," said Bush spokesman Rob Saliterman.
Interest in their return to Dallas has been high for weeks. People who live on Daria Place, the North Dallas cul-de-sac where the Bush home sits, report that there’s been a steady stream of curiosity seekers coming to see the 8,000 square-foot brick home for themselves.
“Before Bush came, we had a very quiet neighborhood here,’’ said neighbor Minette Klein, who said she is nevertheless pleased with the goings-on.
The house is not far from Preston Center, where the former president will have an office while planning is underway for his presidential library at Southern Methodist University.
Both Bushes said they plan to devote substantial time to raising money for the library complex – which will also include a museum and policy center. Programming hosted by the Bush Foundation is set to begin even before the library is complete in 2013.
Officials say they need to raise $300 million to build the complex, hopefully before groundbreaking, which is set for late next year.
The Bushes lived in Dallas in the early 1990s but moved to Austin in 1994 when he was elected Texas governor.
Posted by Dan Cirucci at 5:47 PM