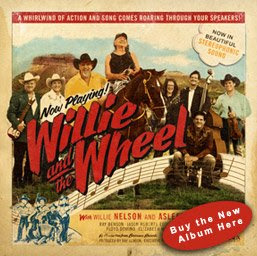 I've always loved the music of Asleep At The Wheel.
This group, under the direction of Ray Benson, lovingly perpetuates the music of western swing - the sound that was orginally poularized by Bob Wills and His Texas Playboys.
Western swing is intoxicating - a lively blend of western music with a dance-to-it swing beat. Wills made the sound his own in the 1930s.
But in recent decades (even though a group named The Texas Playboys still exists) Ray Benson and Asleep At The Wheel have become the keepers of the western swing flame.
Now, The Wheel has teamed with the legendary Willie Nelson on a just-released album called Willie And The Wheel.
This long-overdue concept album takes Willie Nelson back to his musical roots. Teamed up with Ray Benson and the master musicianship of Asleep at the Wheel, this instant classic celebrates the timeless appeal of a most unique and spirited American music genre.
A concept thirty years in the making, Willie & The Wheel is a collection of classic western swing songs hand-picked by the late producer Jerry Wexler.
Better known as ‘Mr. R&B’, Jerry Wexler was a great fan of the original western swing bands like Bob Wills, Milton Brown, Cliff Bruner – all first introduced to him while he was studying journalism in Kansas City. Willie Nelson also had grown up on western swing and it has always figured heavily into his approach to music.
Finally Ray Benson and Asleep at the Wheel (hailed as the modern kings of western swing) were added, resulting in a sublime album, surefooted in its mastery but still as playful and daring as the originals.
Posted by Dan Cirucci at 7:33 AM