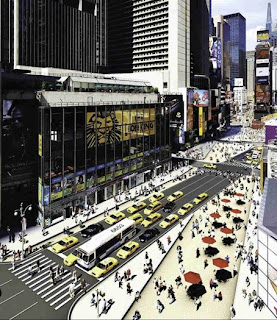 From David Seifman at the New York Post:
The Great White Way will turn into a great walkway.
In a stunning Midtown makeover, Mayor Bloomberg announced today that traffic lanes along Broadway from 42nd to 47th streets and from 33rd to 35th streets will be torn up starting Memorial Day and transformed into pedestrian plazas until at least the end of the year.
PHOTOS: Broadway as a Pedestrian Mall
"By making targeted adjustments at Broadway's two main pinch points, we believe we can ease traffic congestion throughout the Midtown grid," Bloomberg said. "We are going to closely monitor the results to determine if this pilot works and should be extended beyond its trial period."
The $1.5 million pilot program will discontinue vehicular traffic from 47th Street to 42nd Street and from 35th Street to 33rd Street - connecting Seventh Avenue through Times Square, where it is currently bisected by Broadway, and improve traffic flow on Sixth Avenue through Herald Square.
Bloomberg said the result will be simplified traffic patterns, longer green lights and reduced travel times across Midtown.
All car traffic going east and west through Times and Herald Squares will not be impacted and travel times are expected to improve on some of those streets, Bloomberg added.
In addition, the plan is expected to improve bus times on the avenues for the more than 75,000 daily passengers.
We love Broadway and we are frequent visitors toTimes Square and Herald Square (Macy's). We hope the new configurations works out but we don't want to see the hustle and bustle of Broadway disappear. The day that Broadway becomes a calm, languid oasis (or anything approaching same) is the day Broadway dies.
Posted by Dan Cirucci at 5:38 PM