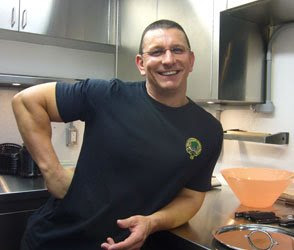 The other night we found ourselves at one of Hilton Head's newest, hippest dining spots - Robert Irvine's Eat!
With celebrity chef Robert Irvine at the helm Eat! is a runaway sensation -- the winner of HHI'S Monthly Reader's poll as the Best New Restaurant on the Island. And that's saying something since Hilton Head has more dining spots per square inch than you can imagine.
One of the best ways to experience Eat! is via the tapas (small plates) menu. And every Tuesday evening tapas, wine, beer and liquor are half price.
Yes, we enjoyed icy lemondrop martinis and followed that with an array of tastes that was more than enough for the four of us.
We savored, shrimp, seared diver scallops, beef sliders, chicken sliders, fried green tomatoes, short ribs, house made gnocchi with mint basil pesto, crab cakes, grits, salad, she crab soup and coconut pecan grouper cheeks.
Everything was wonderful. Our favorites; the gnocchi, sliders, crab cakes and tomatoes.
Eat! is nothing less than spectacular inside with seductive lighting, rich woods, romantic banquettes, a knockout bar and a sophisticated urban vibe.
And yes, Chef Irvine visited the dining room and chatted amicably with guests.
As host of Dinner: Impossible on Food Network, Chef Robert Irvine serves stunningly creative dishes both for intimate gatherings and for huge crowds, all without warning and at a moment's notice.
On the show, he has cooked on a desert island, in an 18th Century kitchen, in an Ice Hotel, for cowboys on a cattle drive, for master instructors at the Culinary Institute of America and at the Inauguration of Pennsylvania's Governor.
A native of England, Irvine joined the British Royal Navy at the age of 15 and his skills in the kitchen soon came to the attention of his superiors. As part of his service for the Royal Navy, Irvine was selected to work on board the Royal Yacht Britannia where the Royal Family and their entourages regularly dined.
During his time training US Navy chefs as part of a guest chef program, Irvine worked in the White House kitchens and his creations were served to high-ranking government officials.
In over 25 years in the culinary profession, he has cooked his way through Europe, the Far East, the Caribbean and the Americas, in hotels and on the high seas. In his career, he has also had the opportunity to serve 6,000 servicemen and women on a US aircraft carrier and plan the menu at a spectacular celebrity-studded after-party at the Academy Awards.
Irvine's first book, Mission: Cook! (Harper Collins, 2007) was published in September, 2007.
Posted by Dan Cirucci at 6:39 AM