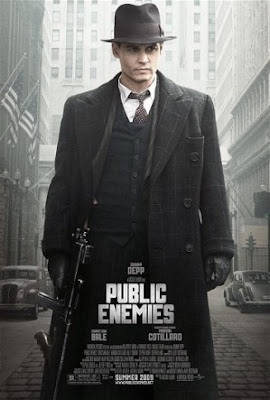 Public Enemies, one of this summer's most eagerly-awaited movies has now opened and we recently saw one of the first showings of this tale of John Dillinger, Baby Face Nelson and Pretty Boy Floyd.
Starring Johnny Depp, Christian Bale, Marion Cottilard, Giovanni Ribisi, Billy Crudup, Channing Tatum and Steven Dorff, the film is directed by Michael Mann.
Both literally and figuratively, this is a very dark film and it is clearly influenced by The Untouchables, Road to Perdition and, above all The Godfather, Parts I, II and III.
Johnny Depp's performance as Dillinger is s0 mumbled and consciously delivered that you feel he's channeling Brando. In fact, everyone in this film seems to be mumbling, whispering and/or speaking with a mild southern accent and it gets so bad you have to strain to figure out what the actors are saying.
Also, the film is episodic and seems choppy at times, almost as if it's unfinished.
One longs for a greater cultural context to Public Enemies. I found myself longing for more signposts of the 1930s depression and a greater sense of the fads, music, architecture, manners and styles of this distinctive era. I kept wanting to open the film up and free it from its constraints.
But this is a tense, neurotic gangster flim and it's very violent.
Lots of people get killed. And sometimes it's hard to tell the gangsters from the law enforcement agents.
But the film remains compelling. The story moves along at a nice pace and even though we all know how it ends, it's hard to turn away from Mann, Depp & Co.
In the end, somehow they make it work.
Posted by Dan Cirucci at 6:23 AM

Its really intresting ..
thanks for great link ...