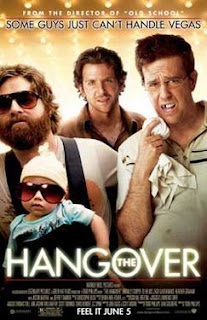 Week after week it keeps pullin them in.
And week after week they keep laughin and tellin their friends.
It's stupid. It's raunchy. It's preposterous.
And yet, just when it seems that everybody has seen The Hangover, more people show up to experience the nonsense.
Why was I laughing with all the rest of them? Why was I even watching this stupid film?
I'm not sure. Except, I did enjoy it.
Here's a big reason why the movie seems to work: the star of the film is Las Vegas. All the glitz and glamour and all the good and bad of the desert empire is here: the showgirls, the mobsters, the thugs, the gamblers, the losers, the swindlers, the whores, the creeps and yes, the dumb bachelors. All this is combined with the sun, the fun, the nightlife and the neon. And it's all played for laughs -- even the wildly reckless parts.
It reminds me of that other Las Vegas winner: Honeymoon in Vegas.
You could call The Hangover a buddy film or a bromance (and the four male stars certainly do play up the guy love) but the truth is that everybody seems to like this movie regardless of gender.
The gags are great. The comic twists are clever. The story (such as it is) keeps moving and even the flashbacks and time shifts are well done. Plus, it doesn't go on too long.
See it: TheHangover.
Posted by Dan Cirucci at 9:24 AM