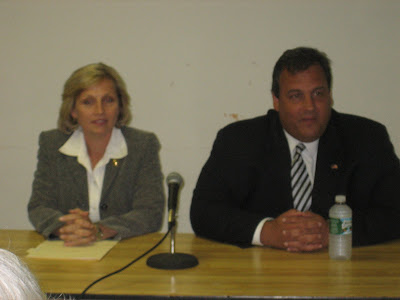 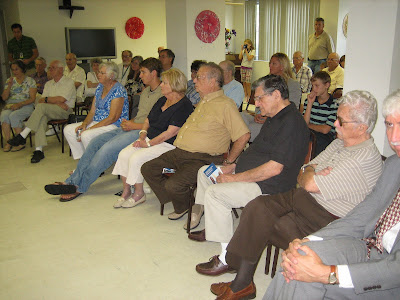 Few candidates have spent more time in South Jersey than gubernatorial candidate Chris Christie.
Chris cares about South Jersey. He knows South Jersey. And he understands South Jersey because he's been here and he's invested time listening to the people of South Jersey. He knows how upset we are about property taxes, runaway state spending, big state deficits, mismanagement of the state government and rampant corruption.
Chris Christie and running mate Kim Guadagno came to Cherry Hill again today and met with a room full of mostly senior citizens at the Grand Apartments just off Route 70.
After a week off the campaign trail for a family vacation at the Jersey shore Chris looked tan and rested. He was sharp and refreshed.
Chris and Kim received a very warm welcome from the audience.
GOP candidates in Camden County have already knocked on 7,000 doors and their phone volunteers have made thousands of calls.
Here's what they tell me: People are angry - very angry.
They're angry about property taxes, reckless spending and corruption.
And they're angry at Jon Corzine and his cronies.
Still, it won't be easy to dislodge an entrenched Democrat machine.
Chris and Kim know this.
That's why they're working tireless to get their message across.
Posted by Dan Cirucci at 4:27 PM

Dan, I'm curious what you think about the reports connecting Christie to the U.S. Attorneys scandal, specifically the mention of him starting a corruption investigation into Bob Menendez during his Senate campaign in 2006. Maybe it was all just an unfortunate coincidence. I hope that's all it was. But for a guy who has run on an anti-corruption, clean up the mess in Trenton platform (and mostly done a very good job of it), this isn't going to help.

Josh:
I fully expect that the Democrats will throw anything at Chris that they can find -- anything and everything.
Chris has said that when he makes mistakes, he'll own up to them. And he's done that.
Hell, he ain't perfect.
But the Democrats who are demanding "investigations" of Christie are the same people who have been covering up for Corzine all this time. They have run our state into the ground and made it the laughing stock of the nation. They are unscrupulous. They have no shame and it would take the most outrageous charges imaginable against Chris to even compare with what they have already done to us and to our state.
But you are wise to keep your eyes and ears open and I believe your concern is sincere. You're being a good citizen.
And I will be attentive as well.
But let's remember what Corzine & Co. have already done. It can't get much worse!
Thanks, Josh - and keep following the blog and commenting.

Maybe it was all just an unfortunate coincidence. I hope that's all it was.
___________________
Jenifer
LaserShield Wireless Home Alarm Security Systems