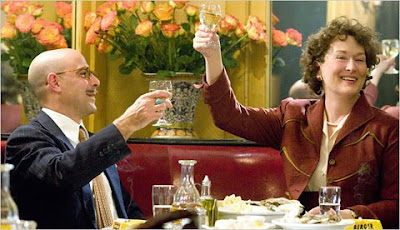 Over the weekend we rushed out to see Julie and Julia the new movie starring Meryl Streep.
First, let us say that it's great to watch Streep's sendup of Julia Child. True, the performance is just this side of caricature. But then again Julia Child often seemed like a caricature of herself.
Let's remember that Julia Child came from an age when people were characters.
Famous people were not homogenized or artificially "humanized" as they often are now. They knew who they were and they were who they were. They were more authentic.
That's the way Julia Child was.
By now you've probably heard that this movie is actually two movies -- the young bride (Jule) of today and the original Julia Child in postwar Paris where she was beginning to define herself. (Hey, she was a late bloomer.)
OK - so the movie almost cries out for a split screen since it jumps back and forth so much.
This movie sort of reminds us of You've Got Mail, another movie that Nora Ephron wrote and directed. It's gimmicky and demographically rigged. It's designed to appeal to both older movie goers who actually remember Julia Child on PBS and younger viewers who don't; that's why Julie is there.
So, not only is the movie kind of sliced in half but there's also not much of a story here. We all pretty much know the story of Julia: she writes a book, get's a TV show and becomes famous. The Julie story -- well, I'll let you discover that but there's really not much to it.
Let me just say that Stanley Tucci is absolutely wonderful as Julia's husband, Paul and he's more than a match for the great Meryl Streep. And Amy Adams is fine as Julie. And it's great to see a movie that is led by strong women characters. Bravo!
But this is a feel good movie - a sort of lightly toasted Hallmark greeting smothered with globs of butter.
And it's slick Hollywood movie making.
Yet, isn't that better than these dreadful disaster movies and shock flicks Hollywood has been turning out?
Surely some of you must agree because Julie and Julia was right up there near the top in the weekend box office race.
So, go - enjoy!
BTW - They've made Julia/Meryl look so big she seems overwhelming. I knew Julia Child was a large woman but I don't remember her as Amazonian.
Posted by Dan Cirucci at 6:43 AM

I met Julia Child at the Reading Terminal Market. I think it was the late 80's.

The woman was 6'3", had hands like a Teamster, and was most gracious when I told her my daughter was also a "Julia." In my mind, this was truly hilarious as she was another "Julia child."