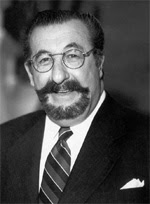 3M.
That's what we called him.
And that's the way he signed many of his memos.
He was a bigger-than-life figure in every way. One of the last of the rugged individuals. One of the last giants. He seemed absolutely indestructible.
His large frame, booming voice, quick mind and ready wit made him formidable. But he could be very gentle and kind as well. He was unique.
He was M. Mark Mendel, a Philadelphia lawyer wrought large.
He took great pride in the title "Philadelphia lawyer" and he carried himself and conducted himself with that same degree of pride. He represented a place and a time when people were "just as they are" and were comfortable with that; no masks, no pretenses.
He was bold where others were meek, daring where others were cowardly, clear where others were duplicitous, loyal and steadfast where others were others were tentative and strong where others were weak.
Somewhere, somewhere his voice is booming and bellowing right now and other souls are running for cover. But they will soon learn to listen and to embrace him.
He will be greatly missed.
From Michael Matza at the Philadelphia Inquirer:
M. Mark Mendel, 80, the combative, fiercely mustached Philadelphia litigator whom friends recalled as "larger than life" - a la Zorba the Greek - died at his home in Radnor yesterday of complications from long battles with failing kidneys and heart disease. A specialist in medical-malpractice and public-utilities law, Mr. Mendel also is remembered for his role as the plaintiff's attorney in a 17-year-long libel case that pitted Philadelphia Magazine against a former New Jersey nightclub owner who claimed the magazine, in a 1971 article, falsely portrayed him as a cocaine dealer. As the case wore on, the defense, in its appeal of the $7 million judgment against the magazine, claimed that Mr. Mendel had out-of-court contact with the trial judge. Although battered for a time by negative publicity surrounding the accusation - and an appeals court decision that overturned the judgment - Mr. Mendel eventually was exonerated, said his friend, lawyer Dennis J. Cogan, who took Mr. Mendel's place as plaintiff's counsel. Ultimately, the case was settled in 1988 for an undisclosed sum on the eve of a second trial. "If you were in trouble or needed something, Mark could be the dearest friend a person could have," Cogan said yesterday. "But you didn't want to be his enemy." Mr. Mendel was born in Schwabisch-Gmund, Germany, near Stuttgart, and narrowly escaped the Holocaust: He came to the United States with his parents and sister, Sigrid, in 1939. Cogan said Mr. Mendel was about 10 when the family prepared to exit Germany. At the border, he wore a watch that was a gift from an aunt, but a German official, possibly an SS officer, ripped the watch off the boy's arm. The incident, Cogan said, planted the seeds of his future toughness. "He said he was frightened that day," Cogan said. "He was ashamed that he was scared; he resolved that he would never be frightened again." Mr. Mendel was active in city government, in bar association affairs, and as a booster for his beloved alma maters, Northeast High School and Temple University. He was a big man - 6-foot-2, 200-plus pounds - whose love of sports rivaled his appetite for fine food, said Susan Smolen, 63, his companion of six years. Smolen, who donated a kidney to Mr. Mendel in 2006, said she was constantly amazed by his stamina. An expert skier, he loved to give lessons when he went to Aspen, she recalled. He raised money for the U.S. Olympic Ski Team. He was a life member the Temple University Varsity Club, and a trustee of the Pop Warner Football League. "He was a wild man," she said. "He was driven."
Posted by Dan Cirucci at 12:16 PM