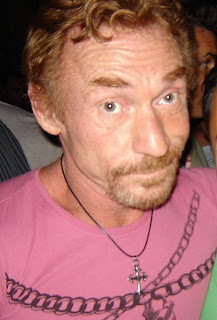 Former child star Danny Bonaduce is at Robbins 8th and Walnut on Jewelers Row in Philly right now.
He looks exactly as you'd expect him to look - just like you see him on TV.
He's reportedly filming a reality show at Robbins with owner, Bernie Robbins (the guy with the diamond in his beard).
Danny is recreating a scene where he buys his engagement ring for his fiance, Amy Railsback.
Bonaduce is busy acting out the scene (looking at diamonds, discussing the purchase, getting the ring wrapped, etc.) again and again.
Between takes, he's also spending a good deal of time out front talking with passers-by on Walnut St. He's quite amiable. But it's a very hot day so outdoor schmoozing time is limited.
His motorcycle (a Very Big Bike) is parked outside.
A native of Broomal, Danny has always had strong ties to the Philadelphia area and is now heard on FM 94, WYSP radio every day.
Posted by Dan Cirucci at 4:28 PM