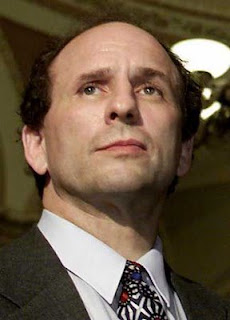 Have Democrats learned their lesson?
Have they learned not to politicize the death of a famous liberal Senator?
Or will they make the same mistake that they made in 2002?
In 2002, after the tragic death of Minnesota Senator Paul Wellstone [pictured] the Democrats turned his memorial service into a kind of campaign rally.
The 20,000-capacity memorial service for Wellstone and the was held in Williams Arena at the University of Minnesota and was broadcast live on national TV.
Many high profile politicians attended the memorial, including former President Bill Clinton, former Vice President Al Gore, and more than half of the U.S. Senate.
The Bush White House offered to send Vice-President Dick Cheney to the service, but the Wellstone family declined.
The nation watched in horror as the service for Wellstone took on all the trapping of a political convention.
Republican members of Congress who attended the service eventually became so disturbed by the tone of the speeches and the vitriol of some of the "eulogies" that they felt compelled to leave.
It was sad moment, but not in the way that we associate with memorial services.
It was sad moment for the Democrat Party and for America. It was stupid and disrespectful.
And the whole thing boomeranged, costing the Democrats congressional seats and setting back the party's agenda?
Have the Democrats learned their lesson?
Stay tuned. Listen carefully. Watch closely.
We are about to find out.
Posted by Dan Cirucci at 7:01 AM