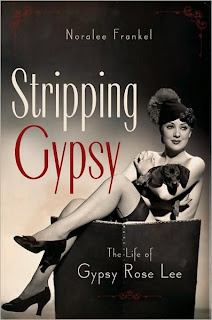 Just remember: Summer doesn't end till the third week in September.
So there's still time for some late great summer reading.
I've already been through quite a few books this summer.
Here are some of my very favorites so far:
Stripping Gypsy: The real story of legendary stripper Gypsy Rose Lee, her mother Rose, her sister June and their dysfunctional family as told by Noralee Frankel. Way more that the musical "Gypsy" could ever tell, and way more honest. The author takes you through vaudeville, Broadway, Hollywood and every theatre, night club, hot spot, cabaret and bar, and two-bit strip joint along the way. It's not always a pretty picture. But Gypsy Rose Lee emerges as a feisty, instinctive, intelligent, independent woman who knows her to manage herself and her career if not all the men in her life.
Wishful Drinking by Carrie Fisher. Her father is Eddie Fisher. Her mother is Debbie Reynolds. And if you're of a certain age, you remember Eddie and Debbie and Liz and Mike and Liz and Eddie and Liz and Richard and Debbie and Harry and Liz and, well, you understand. Carrie Fisher doesn't necessarily remember all that because she's had electroshock therapy. But don't think this is a grim or sad book. It's actually quite funny -- poignant, human, inspiring in many ways. Carrie is a recovering drug and alcohol abuser who is also bipolar. But she's marvelously creative; a fine author, actress and storyteller. BTW: The book is adapted from Fisher's one-woman stage show, soon to be on Broadway.
Losing Mum and Pup - Christopher Buckley tells the story of the death of his mother, Pat and then a short time later, his father, Bill. This is no sentimental goodbye. And sometimes it seems like too much information. Mum and Pup are tough, often stubborn, often difficult characters. But that's part of what makes it all so compelling. This is a full, balanced, revealing portrait of two of the most vivid characters of the second half of the 20th century and a delicious peek inside the world they built. It's also a complex family portrait. So, you can enjoy it on more than one level and for that we can thank the author who gives us a realistic, touching take on Mum and Pup.
She Always Know How - Charlotte Chandler's three-dimensional portrait of the great Mae West based on a serious of personal interviews conducted not very long before West passed away. Mae West always knew how to take take of herself. She always knew how to make a buck. And she knew how to invest, too. She made lots of money -- and not just from the movies. She had extensive real estate holdings and she was able to support her mother, father, siblings and many friends. She was shrewd, generous, proud and self-protective. And she was also a fine writer who had a way with quips and one-liners. This is one of Charlotte Chandler's best books.
Good Day! The Paul Harvey Story by Paul Batura - Tells the story of America's legendary broadcaster Paul Harvey. This can't really be called a definitive biography but it's the best we have for now. And it's really quite good as it follows Paul Harvey from Oklahoma, through the 20th century and into the Midwest where he emerges as one of America's best known and most powerful radio voices. It's also the story of Harvey's "angel," his wife Lynne Cooper Harvey and their lifelong love affair. In many ways she was the brains behind the success of Paul Harvey. She's the one who helped him become one of America's most beloved personalities. She did much of the hard work and gave him the love and confidence to succeed. Sometimes nice guys DO finish first. Paul Harvey was that kind of guy.
Posted by Dan Cirucci at 12:01 PM