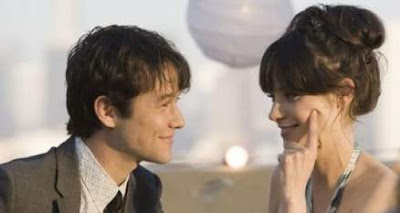 Yesterday we saw "500 Days of Summer" and I can report to you that this is, far and away, the year's most original movie.
It's incredibly daring in that it tells a "love story" from the point of view of a sensitive, intelligent, caring young man.
This vibrant comedy avoids cynicism and unfolds like a breath of fresh air, reminding us that human relationships (most notably, those between the sexes) are not so simple.
And what a delight it is to experience a movie that depicts twentysomethings as passionate, aware, three-dimensional people. No trivializing or stereotyping here. As someone who spends quite a bit of time with those in this age group, I found that this film gets it right. And it presents us with characters worth caring about.
Yes, the movie involves a bit of obvious role reversal with some cinematic gimmicks thrown in. But overall it's an open, honest and wonderfully appealing film.
Kudos to director Marc Webb and stars Joseph Gordon-Levitt and Zooey Deschanel [pictured] as well as the whole cast and everyone involved with this gem. And thanks for a charming new screen personality in Levitt. He has a bright future ahead of him.
Impressive. This is a breakthrough film.
Posted by Dan Cirucci at 8:30 AM