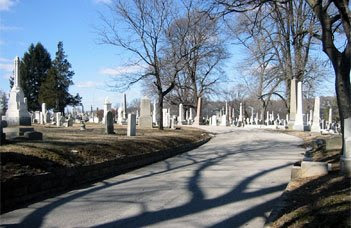 If you haven't been to Philadelphia's Laurel Hill Cemetery you're missing one of the region's most extraordinary gems.
And now an informative tour of Laurel Hill is as close as your cell phone. You simply punch in the cell phone tour number then move from stop-to-stop along the 14-stop tour, advancing the tour stories at your own pace on your cell phone.
We toured Laurel Hill over the weekend and had a great time. The stories are fascinating and the view is absolutely breathtaking. And, Laurel Hill is easy to reach just off of Kelly Drive or the Expressway. Plus, it's all free.
Laurel Hill is one of the few cemeteries in the nation to be honored with the designation of National Historic Landmark, a title received in 1998. Numerous prominent people are buried at the Cemetery, including many of Philadelphia’s leading industrial magnates. Names such as Rittenhouse, Widener, Elkins and Strawbridge certainly pique local interests, but Laurel Hill also appeals to a national audience. General Meade and thirty-nine other Civil War-era generals reside here, in addition to six Titanic passengers. As in its earliest days, Laurel Hill’s natural beauty and serenity continue to render it a bucolic retreat nestled within the city’s limits overlooking the Schuylkill River. This beautiful green space is further complemented by the breathtaking art, sculpture and architecture that can be found here. These are just some of the many attributes that render Laurel Hill Cemetery a primary destination for local and national visitors to the City of Brotherly Love.
Posted by Dan Cirucci at 6:08 AM