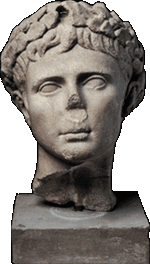 Our nation's founding fathers were fascinated by the stories, the heroes, the experiences and the art, architecture and culture of ancient Rome.
They borrowed freely from Roman literature and mythology and were inspired by the Roman republic and its system of laws and governance.
Our ties to the Roman empire are actually deeper and more enduring than you might suspect.
Ancient Rome & America, the wonderful new exhibition at Philadelphia's National Constitution Center, showcases the cultural, political, and social connections between the lost world of ancient Rome and modern America.
Rome, like the United States, overcame a monarchy to become a republic.
Long after the fall of ancient Rome, its heroes and legends have continued to influence future generations. From the battlefields of the revolution to the chambers of Congress, Rome became a part of America’s foundation. Through marble sculptures, paintings, jewelry, coins, and ceramics, Ancient Rome & America draws striking comparisons between Roman and American culture, from theories of government to slavery and civil war, to continental expansion and worldwide influence.
The exhibition features more than 300 artifacts from Italy and the United States, bringing together a never-before-seen collection from Italy’s leading archaeological institutions in Florence, Naples, and Rome, paired with objects from over 40 lending institutions in the United States. In this exhibition, you will view antiquities that you normally would not be able to see without traveling to Europe.
We've seen the exhibition and we can report that it is through, informative, illuminating and thought-provoking. In short, it's a real eye-opener.
Covering over 8,000 square feet, Ancient Rome and America is organized into five galleries: Introduction, Building a Republic, A Classical Revival, Expansion and Empire, and Epilogue.
This is an exhibition that is easily worth a significant investment of your time. It's really one of the largest and most substantial exhibitions that the NCC has ever hosted.
America and Ancient Rome runs through August 1 and the NCC is open seven days a week.
Don't miss it!
Posted by Dan Cirucci at 9:07 AM