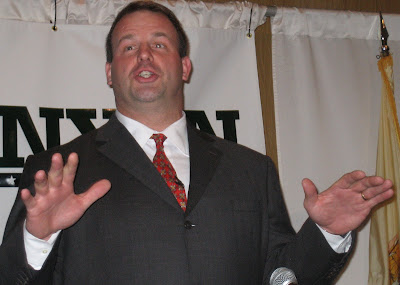 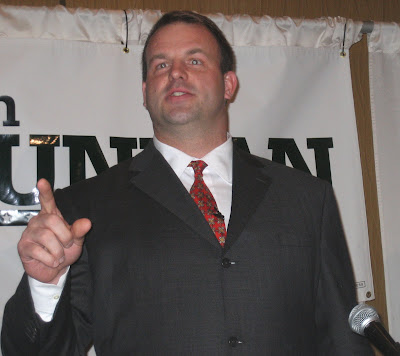 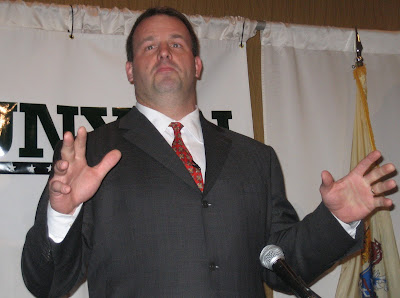 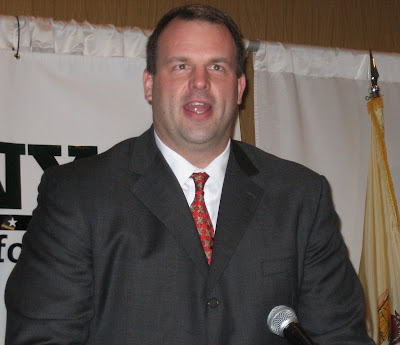 Rarely have I seen the Republican Party as super-charged and united as I did last night when a huge crowd gathered at a hotel ballroom just off Exit 4 of the New Jersey Turnpike to hear pro football great Jon Runyan announce his candidacy for Congress.
Every media outlet in the region was on hand for the announcement and the room crackled with excitement as Big Jon stepped up to the microphone.
So, now it's official: Runyan will challenge freshman Democrat Congressman John Adler in a race that will be watched nationally.
This former Philadelphia Eagles star is a huge presence, in more ways than one. Runyan's got the name recognition, the backing and the money to be a formidable candidate in what has been a Republican district. The GOP in Burlington, Ocean and Camden counties have united behind Runyan to reclaim this seat in a district that stretches almost from the Delaware River and New Jersey's western border with Philadelphia on one side, clear across the state to the Atlantic Ocean on the other side.
There is no doubt about it: Runyan has star quality. He's a big, rugged, broad-shouldered guy. But one senses a human-sized sensitivity with this guy as well. Maybe it comes from all the community and charity work he's done.
And last night, Jon Runyan did not disappoint. He came across as articulate, attentive and knowledgeable.
Runyan says he's running for Congress because he's tired of career politicians spending freely, raising taxes, sending us into debt and expanding government at an alarming rate. And he wasted no time in pinning Adler (who served in the New Jersey State Senate for many years) to the failed policies of Governors Jim McGreevey (who was forced to resign in his first term) and Jon Corzine (who was thrown out of office after one term).
Yes, New Jersey's now in Big Trouble. The state is teetering on the brink of financial collapse.
And Runyan sees Adler as part of a group that's now bringing those same failed policies to Washington.
Runyan got a big laugh from the crowd when he pointed out that Adler's first vote as a Congressman was to elect Nancy Pelosi as Speaker of the House. Well, we all know how that turned out. Pelosi and her Democrat colleagues have managed to rack up the lowest approval ratings of any Congress in modern times.
There's something refreshingly unslick about Jon Runyan.
He doesn't seem calculated. He doesn't seem calibrated. He doesn't seem rehearsed.
You get the sense that he's doing this not to fulfill some kind of pre-ordained personal plan but because he really cares; because he wants to make a difference.
Let's put it this way: I don't think Jon Runyan spent grammar school or high school dreaming of serving in Congress some day.
And I can't imagine Jon Runyan answering to a political boss, just as I can't imagine anybody pushing this guy around.
Yes, Runyan's facing a tough challenger in Adler who is smart, clever and extremely well-financed. And yes, Adler will be buttressed by Big Labor and all the resources of the Democrat Party and its many related special interest groups. And yes, Adler has consistently triumphed by working very hard to get where he is.
But Runyan has fended off a few challenges and triumphed over a a few big opponents himself.
And he's done quite well, thank you. In fact, he's managed to go to the Super Bowl twice.
I wouldn't count him out.
Posted by Dan Cirucci at 8:24 AM