Of Presidents And Their Enemies 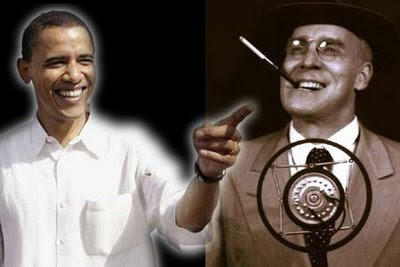 Liberal friends have been tossing barbs my way on Facebook once again.
I don't mind it. It goes with the territory.
But I don't have the time to set out my views on EVERY social media outlet available.
So, I tell them to read my blog and my print columns for my view of things.
Inasmuch as I don't have a staff and can't be at two places at once, I need to place my views where they have the widest audience and the most impact. That's one of the reasons why I'm on Blogs Lucianne Loves -- one of my favorite sites!
Well, here's what I want to say right now: Obama set out to be a transformational president. He made that very clear all along.
So, no one should be surprised that Obama and the Democrats today are just as reviled now as FDR and the Dem/liberals/unionists and, yes, socialists were in their day. That's the closest comparison. FDR was despised by huge groups of people and he and the Dems then had many threats against them as well.
Some people hated FDR so much that they could not even bear to say his name. They simply referred to him as "that man." And when they said "that man," everybody knew who they were talking about.
Obama is following classic Saul Alinsky (radical) principles but he has incorporated them into the power suites of Washington. FDR was inspired by one of the original progressives - Wilson. Wilson (an academic idealist) was quite radical in his own way. Obama was inspired by FDR. And FDR defied the United States Supreme Court in much the same way that Obama is attempting to defy the Court now. It's a very similar script.
FDR had Hopkins and Ickes. Obama has Axelrod and Emanuel.
FDR had an elitist liberal cabal around him and so does Obama.
BTW: LBJ was hated as well. I was there. I know. We used to chant: "Hey, hey, LBJ, how many kids did you kill today?"
But let's not forget that it was another transformational president, Ronald Reagan who was nearly killed by an assassin. And he sorta chuckled his way through it. He never complained, never bellyached, never carped about his enemies, never whined.
He threw back his shoulders, put a smile on his face, charmed the nation and gave the world a model of leadership that's still worthy of emulation.
Yes, even Obama cites Reagan as a role model.
But as the years drift by, Reagan stands apart. And he towers over all of them.
Posted by Dan Cirucci at 2:58 PM

He threw back his shoulders, put a smile on his face, charmed the nation and gave the world a model of leadership that's still worthy of emulation.

BINGO! And that's why the Republicans haven't been able to take more advantage of this situation. From John Boehner screaming "Hell No You Can't" on the House floor to Michelle Bachmann's and Sarah Palin's vitirol to Rush Limbaugh's barking, many people think the Republican Party is filled with deranged lunatics. That obviously isn't the case, of course. But that's the perception. If the face of the Republican Party was a smiling, friendly face who didn't get caught up in inflammatory political rhetoric, they'd be in much better shape.

A lot of people don't like what the Democrats are doing. But they don't want a psychopath leading them either.

Josh: You must remember that someone like Ronald Reagan often comes along only once in a generation.
Nonetheless, I'm confident that a Real Leader will emerge to show us the way out of this mess.
A "psychopath" leading us? I'm not sure who you're referring to.

Josh: Am I wrong? You that Republicans are this, that and the other thing then write that "that obviously isn't the case". Then end your comments by telling us that we have inflammatory rhetoric". I've admired your thought process---up til now. I'm also curious as to your heroes on the Left. Since you mentioned Mr. Limbaugh is it safe to assume I can say Maddow and Olbermann?

I don't like Maddow and Olbermann either. They're the opposite extreme, which is just as bad. Both sides can learn a lot from Reagan.