Why I Won't Watch The Oscars 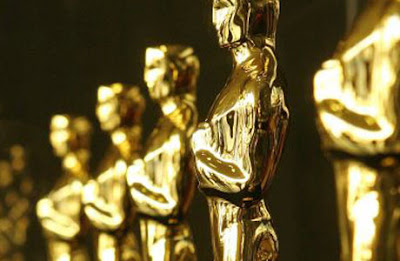 I won't be watching the annual Oscar telecast tonight and I suspect I won't be alone.
The audience for Hollywood's annual egofest has been falling for years and every gimmick that the Academy of Motion Picture Arts and Sciences imposes in an attempt to spike the ratings seems to fail.
By the way, does Barabara Walters still do her annual pre-show interviews of Oscar contenders or somesuch? Well, if she does I won't be watching that either.
Walters had become a caricature of herself and she's now reduced to interviewing the likes of Lady Gaga. She should have retired ages ago.
Anyway, the Oscacast makes for an interminably long evening of celebrities reading from cue cards, bad commercials and over-extended movies clips from films you never wanted to see in the first place. Even the red carpet show beforehand has become a bore as the Hollywood crowd parades around with dozens of handlers and PR flacks in tow.
So few of today's stars exhibit the true presence and discipline of the predecessors. Now, everyone's either going into or coming out of rehab. Indeed, we know far too much about these supposed luminaries than we ever wanted to know.
There's no mystique to stardom anymore, no real allure.
And then there are this year's hosts: Alec Baldwin and Steve Martin. Baldwin is just another bloated, bitchy, blotchy liberal bloviator. And, though Martin is admittedly talented, I have no interest in him whatsoever. He's a decent comedian and an OK actor who also tries to be an auteur. But as a "star," he just doesn't make it.
It must be a nightmare to handle all these people.
I feel sorry for anyone who works this show.
Now that the big studios and the powerful movie moguls are all gone there's no one to control this crowd.
The actors are in charge now and that means the inmates have truly taken over the asylum.
It's sorta like watching the 1950s classic "The Snake Pit."
But hey, the movie was better than this inflated story.
And most movies of the 30s, 40s, and 50s were better than the movies of today.
Which is just another reason why I'll skip the Oscarcast and probably watch Turner Classic Movies instead.
Hooray for Hollywood!
Posted by Dan Cirucci at 4:44 PM

I too will not be watching. It is a sacrifice in that I will not be hearing from experts who will be educating the masses on economics, politics and environmental science while giving their acceptance speeches.