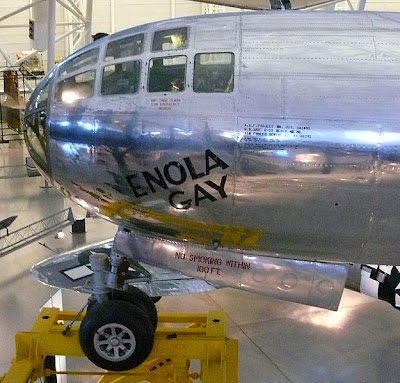 With spring beckoning and warmer weather tempting us to travel, we decided to head on down to Washington for the weekend and see what interesting adventures we could find.
Our first stop was the National Air and Space Center -- but no, not the one on the Mall. Instead, we headed to the big, new Air and Space at Dulles Airport in Northern Virginia.
And all we can say is WOW!
This place is vast.
You'll see more aircraft and space hardware here than you've ever imagined. From the very earliedt days of flight right on into the jet age and the space era, it's all here!
Officially, The Steven F. Udvar-Hazy Center is the Smithsonian National Air and Space Museum (NASM)'s annex. But to call this place an "annex" would be a joke. This is no anex. This is IT.
The Center was made possible by a US$65 million gift in October 1999 to the Smithsonian Institution by Steven F. Udvar-Hazy, an immigrant from Hungary and co-founder of the International Lease Finance Corporation.Construction of the Center, which was designed by HOK, required 15 years of preparation.
NASM has always had more artifacts than could be displayed at the main museum on the National Mall in Washington, D.C. Most of the collection had been stored, unavailable to visitors, at the Paul E. Garber Preservation, Restoration, and Storage Facility in Silver Hill, Prince George's County, Maryland.
Opened in December 2003, the Udvar-Hazy Center displays historic aviation and space artifacts, especially items too large for the National Air and Space Museum's building on the National Mall, including:
--the Enola Gay, the Boeing B-29 Superfortress that dropped the first atomic bomb on Hiroshima, Japan
--the Space Shuttle Enterprise. The "Discovery" is expected to be added to the collection once the Space Shuttle fleet is retired.
--the Gemini VII capsule
--an SR-71 Blackbird (highlighted & filmed on-location in "Transformers: Revenge of the Fallen". an Air France Concorde supersonic airliner
--a US Air Force Lockheed L049
--the Boeing 367-80 jet transport, which was the prototype for the Boeing 707
--a Redstone rocket.
Of course, our favorite was the historic Enola Gay.
We also liked the gleaming, silver Pan Am clipper and the Concorde supersonic aircraft.
While we toured this vast museum of aircraft we also enjoyed our visit to the mock control tower we you can view the surrounding countryside for miles. And since it was a clear day, we do mean miles!
And, let's not forget Amelia Earhart's flight suit and the scissors that were used to trim her locks before her final flight.
And here's the best part: the whole place is free!
Still, you will have to pay a hefty $15.00 parking fee.
But it's worth the drive and the fee (bring a carload) as this is an incredbible treat.
And if you think that you don't have to come here because you've already visited the Air and Space Museum on the Mall, you're wrong.
You can spend the whole day at NASM Dulles.
We did. And we had a great time!